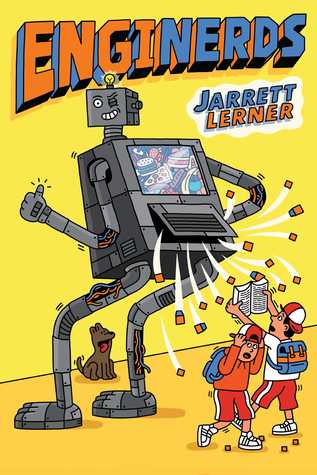 Opening Lines:
"THERE’S A BOX ON MY front porch.  It’s big. Brown.  Smooshed in at the corners and bruised along the sides.  It’s for me.  How do I know?  Somebody wrote KENNEDY in thick black marker on the box’s top."

Ken and his friends have a mutual interest in science and technology, meeting every day over lunch in the science classroom.  Some members of the group have been referring to themselves as the EngiNerds, a name you'll never catch Ken using.  One day, Ken finds a box on his front porch, inside are a bunch of parts and a list of directions for putting the project together.    Ken suspects that his Grandpa K, an engineer who's notorious for giving him gifts to construct left it for him.   Unable to move the heavy box on his own, Ken enlists the help of his best friend Dan and during the process of dragging the box inside, Ken's dog escapes.  When they return from their dog search they find a robot where all of the loose parts previously were.  Since no one else is at home, they have no idea who put the robot together.   Is it possible that the robot put itself together?  Ken and Dan are surprised when the robot introduces itself as  Greeeg and lets them know it wants to be fed "com-Est-ib-ulls,"  which consists of any kind of food product, packaging and all.  Greeeg has a wonderful digestive system that compacts everything away, but his appetite is also insatiable demanding more and more. When Ken runs out of food to feed him, Greeeg leaves Ken's room in the middle of the night on a raid of the pantry, which turns into a huge problem when Greeeg's compaction system makes a huge amount of noise.  Ken tries hard to keep his parents from noticing and is relieved when Greeeg offers to "DIS-pose" of the food he's been storing up.  Ken didn't know that meant Greeeg would be shooting off a cube size pellet of the digested food at high speed at him.   In the meantime, other members of the EngiNerds have been receiving robots and pretty soon the boys have an army of aggressive robots demanding to be fed.  When the boys can't seem to meet the robots demands, the robots take off across town searching for more food and won't let any obstacle stand in their way.  It's now up to Ken and the EngiNerds to figure out who sent the robots and deactivate them before the entire food stores of the town are consumed.

I first heard about EngiNerds during #MGBooktober on Twitter, fellow book bloggers were giving it rave reviews and the cover is just so enticing.   Then the author offered to sign copies of his book and so I ordered one for my public library, which didn't have a copy of its own and asked if he would kindly personalize it.  Needless to say, I was pretty excited to be the first one to read it before donating to the library later this month!   As the cover illustrates there's plenty of humor in the story, in the dialogue between Ken and Dan and especially with those pellet sized missiles coming out of Greeeg's backside.  The chapters are also fairly short and with an emphasis on science and robots, it seems ideal for a reluctant reader who wants to read a few pages at a time.    EngiNerds also seems to tie in well with other STEM books designed to highlight innovation, science and engineering and I can really see kids wanting to make some of the same catapult constructions out of rubber bands and chopsticks as Ken and Dan did in the story.  There are a few illustrations, but think the story would've really hooked the reader with a few more added in.  Overall, an entertaining story of robots gone amok and the friends who creatively fix the problem.  I'm delighted to see that there are plans for another book in the series too.
Posted by Brenda at 4:52 PM

I have been seeing this book everywhere. So glad to hear you were able to get a signed copy for your local library and that you got to read it first. This sounds like a book that will entertain a lot of kids (and adults). I like the STEM connection too. Thanks for sharing.
~Jess