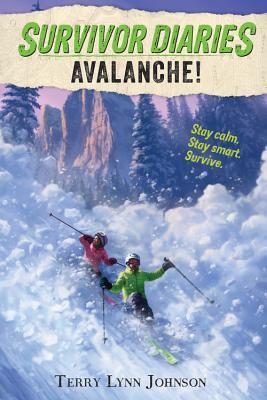 Source:  Edelweiss Above the TreeLine

Twelve-year-old twins Ashley and Ryan are skiing with their parents in Wyoming's Grand Teton Mountains where there is a ground-shaking rumble. Unstable snow rushes downhill and buries them in icy white.  It will take all of their knowledge and grit to survive.

Survivor Diaries is similar to the I Survived  series, with the variant being real kids surviving in harsh wilderness conditions, the next one is called Overboard!  For twins Ashley and Ryan it's surviving an avalanche.  The story begins as Ashley is being interviewed by a reporter for a new series on brave kids, she recounts the events that lead up to the avalanche.  The series is a sort of what to do if you land yourself in this situation and how to survive.  Ashley struggles to try and be as good as her brother at school or to at least live up to her dad's and her own expectations to be a faster skier like her brother Ryan.  Ryan's the adventurous type, the one who hears about a study being done with the Wolverines in the area and then wants to go off the trail chasing after them.  Terry Lynn Johnson wastes no time getting the action started, detailing Ashley getting caught in the snow pouring down from the mountain, tumbling, unable to grab onto anything to prevent herself from being pulled down further.  And then Ashley's training kicks in and she remembers the importance of not panicking.   Once she's free,  Ashley races to uncover Ryan from the snow he's buried under, with the only thing visible being his stick peering out of the snow.   Bruised and with an injured knee, cold and damp they struggle to find a way to get warm.  Then the realization hits that Ryan can't remember who she is.   Ashley is usually the follower, in her brother's shadow, but now after his injury, she needs to take the lead.  She's resourceful using the elastic of her underwear as a bandage for her knee and knowledgeable from her training.  She's the one who gets them started in digging a snow cave, keeps Ryan alert by reminding him of things they've done together in the past, while hoping his memory will come back. There are many obstacles for them to overcome, not to mention a bear in the area, but Ashley perseveres to get them to safety.  I especially liked the link that was made between Ashley watching a wolverine taking on a bear and using it as a catalyst for her own grit and determination to get up the side of the mountain while pulling her brother behind her.   Avalanche! is packed full of  practical tips on being out in the elements.  It's educational while being highly interesting and with its full page black and white illustrations depicting the action and survival tips from the National Avalanche Center at the back of the book,  it certainly makes for a wonderful survival story.