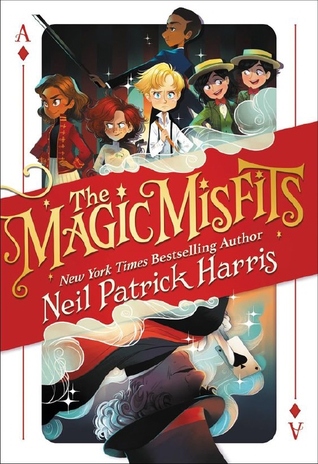 Opening Line:  "In the darkness of a train yard, somewhere on the far edge of town, a shadowy figure emerged from a thick curtain of fog."

After his parent's suddenly disappeared,  Carter Locke is taken in by his Uncle Sly.  Sly is a weaselly thief and con-artist who didn't take Carter in out of the kindness of his heart, but for the ulterior motive of swindling people out of a couple of dollars and their belongings while Carter performs the magic trick's he taught him.  Carter doesn't believe much in magic, at least not his Uncle's kind of magic which involves tricking people, and especially not when Uncle Sly takes advantage of their kindly landlord, Mrs. Zalewski.  Having had enough of his Uncle's thievery, Carter hops a train headed for Mineral Wells, hoping for a new start.  Once in town, Carter meets Mr. Vernon who runs a local Magic Shop with his adopted daughter Leila and the other Mr. Vernon, a chef at the Grand Oak Resort.  He also meets Theo and Ridley, two kids who with Leila meet weekly at the shop to practice their magical skills.    At first, things start to look up for Carter as he's making new friends, but then he and the misfits land in the middle of a  heist planned by the greedy ringmaster B.B. Bosso and his equally villainous circus performers, and it's now up to Carter and the magic misfits to unveil Bosso's plans and save the town and Star of Africa diamond.

Do you like magic and the circus?  Well, the first book in The Magic Misfits by Neil Patrick Harris blends these two things together while adding puzzles, tips and directions for performing magic tricks and even a few secret messages to decipher.  Carter is a very sweet and intelligent character with strong convictions for not stealing, unlike his Uncle Sly who performs magic to get something in return.  Magic, real magic isn't something Carter believes in, and he's never really thought of magic being performed just to entertain before.   Mr. Vernon attributes Carter's lack of belief in magic to losing his innocence and how his past experiences have jaded his views.  I really enjoyed Mr. Vernon and the misfits, they were so instrumental in rekindling Carter's curiosity in magic, his wonder in how they perform their magic tricks and how they believe magic is all around you and can bring joy to people.  The writing style is similar to A Series of Unfortunate Events, with an interrupting narrator, definitions of words like "vagabond",  "levitation" and "transformation" and a narrator trying to convince the reader to think or act in a certain way.   At times,  I  had a hard time separating the image of Neil Patrick Harris as Count Olaf from the narrator of this story, but then I decided to just go with it and found the story to be entertaining with characters that I hope to learn more about in the next book of the series.   The black and white story illustrations by Lissy Marlin are gorgeous and could almost be scenes from an animated movie.  The inclusion of directions for how to roll coins on your knuckles, how to make a color prediction and how to move objects with your mind would delight any child interested in magic or someone who just wants to try out the magic tricks described in the story.   Plus the premise of a group of diverse friends busting up a heist by circus performers to return the towns peoples stolen goods makes for an exciting, fun adventure.
Posted by Brenda at 12:53 PM