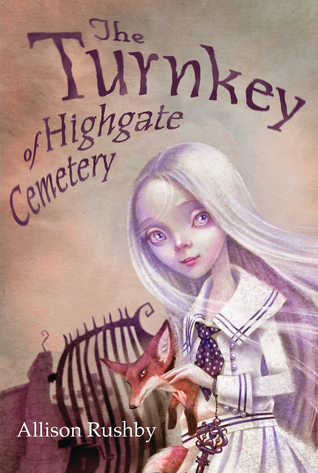 Opening Line:  "Flossie lowered the book she was reading as she felt the girl awaken from rest and leave her grave."

The Turnkey of Highgate Cemetery takes place during World War II at the height of the Germans nightly aerial attacks in London.  Twelve-year-old Flossie Birdwhistle is the ghost of a girl who was buried at Highgate Cemetery.  The Cemetery makes up part of a network of cemeteries built on the outskirts of London during the 1800's referred to as the Magnificent Seven, each housing the interred with its own spiritual advisor and Turnkey.   Just recently the deceased of Highgate voted Flossie to become their Turnkey, she will stay "awake" and assist everyone else with staying happily at rest.  While making her nightly rounds to St. Pauls Cathedral, she observes a man wearing a Nazi soldiers uniform holding a mysterious object.  Flossie believes he's connected to the twilight or spirit world.  What makes his presence so odd is that the object he is carrying appears to be from the outside world, which shouldn't exist in both the living and in the spirit world, he doesn't have a spiritual guide or Turnkey with him and he's clearly from a foreign country.  Concerned for her beloved cemetery, Flossie enlists the help of the nearby Turnkeys and travels to Germany to piece together what the man's intentions are.  It will take all their combined efforts to stop his sinister plans.


At first glance, I thought The Turnkey of Highgate Cemetery would be similar to something like The Graveyard Book, with the main character living around a cemetery.  While Flossie and her friends are ghosts there isn't anything really spooky about this book, so it's not a very fair comparison.   Instead, we have an interesting mix of historical details from World War II, the paranormal and some of the potential horrible outcomes that wars can cause.  Flossie clearly loves her cemetery, and even though she sometimes feels she wasn't the best pick for the job, she does take steps to defend it against the Nazi soldier trying to destroy it.  She does take her job as Turnkey very seriously, especially when the interred become restless.  Like little Amelia who visits Flossie because she has been searching for the doll in her "memento mori" or picture of herself after her death, without a second thought Flossie finds a replacement that helps Amelia to return to rest.  Flossie's past is slowly revealed as the circumstances of her death and that of her father's become clear.  Rushby created very specific rules for her world, how a Turnkey can warp from place to place, how they can copy an object from the real world into the spirit world and how the interred can only leave the cemetery if they're carried outside the gates. The story also examines some of the Nazi's practices during World War II, how they performed archaeological digs searching for the Ark of the Covenant, and how there was a group of individuals called the Ahnenerbe examining the racial heritage of Germans for Hitler.  Overall, a very enjoyable ghost story set during World  War II and enough twists and danger to keep things entertaining.
Posted by Brenda at 7:00 AM 4 comments: 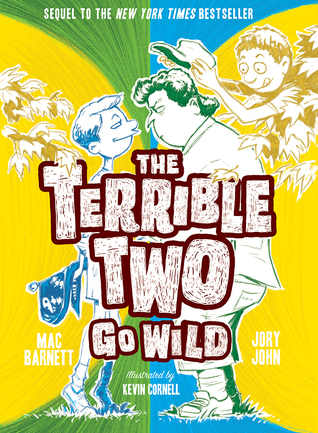 From Goodreads:  "Everyone’s favorite pranksters are at it again! School’s out, and Miles and Niles are running wild in the woods outside town: climbing trees, exploring caves, and, yes, pranking. But these leafy, lazy days of mischief darken when bully Josh Barkin and his cadets from a nearby kids’ boot camp discover the merrymakers—and vow to destroy them. Are our heroes’ sharp minds any match for these hooligans’ hard fists?"


The Terrible Two Go Wild was just the book that I was looking for to start off my summer reading, something filled with hijinks, pranks, and humor.  In the newest book,  Niles and Miles have set up their secret summer headquarters in a cave within the Yawnee Valley Regional Park and Outdoor Recreational Area.   Nearby, Josh Barkin, principal Barkin's son is a camp counselor at the Yawnee Valley Yelling and Push-Ups Camp.  Josh runs Papa Company, where he whips his cadets, twins Splinters and Mudflap into shape. The pranks in the series are meant to be over the top, usually with very little consequences and are also meant to be light and fun.  Niles and Miles do seem to follow a strict code of conduct and only direct their pranks at people who they feel deserve it.   In this sequel, Josh claims to pull a prank when he encourages Splinter to put a rock on his head so Josh can imitate William Tell by throwing a stick to knock it off.  When he misses, Josh wants to get credit for pulling off the best prank ever.  It's apparent that Josh doesn't understand that pranks aren't meant to be mean.  In this sequel, Josh comes off as more of a troublemaker or bully,  I wasn't particularly fond of him teasing an animal that he held captive in a cage, or continually referring to his cadets as "dumb nimbuses."   It's a little too close to another insult for my liking.

Now Niles and Miles, I just adored them they were so funny and sweet.  A huge contrast to Josh.  They have such an imagination, wearing camo outfits with flowers on them and the way that the evaded Josh and his crew in the field was very creative.   I was also chuckling with how they took offense that Josh would even think of himself as a prankster on their level.  Taking it upon themselves to show that pranking was "too fine an instrument for a brute's clumsy fingers."   The emphasis on classic books, even using the military tactics from The Art of War made for some entertaining reading.  Principal Barkin was also a pleasant surprise taking a softer tone toward Miles and Niles, almost asking to be pranked by the duo.  There are some lovely interactions between Miles and Principal Barkin and the interesting idea that a prank between friends can even be a sign of affection.  How Principal Barkin was incorporated into the story to show that principals and teachers have a life out of school, that they celebrate summer vacation in much of the same way that your friends from school do.  If Barnett and Jory John continue to write more books in the series, I envision Principal Barkin being a whole different kind of principal, but they definitely won't become "The Terrible Three."    And the illustrations by Kevin Cornell so perfectly match the story, my favorites are the stack of Niles books and the ones with Principal Barkin hiking through the woods.  A nice addition to the continued adventures of these pranksters.
Posted by Brenda at 12:06 PM 1 comment: