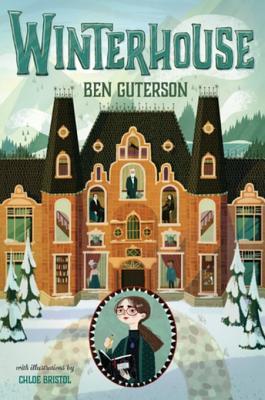 Source:     Edelweiss Above the TreeLine

Opening Line:  "When Elizabeth Somers tugged open the gate to her Aunt and Uncle's yard and saw an envelope duct-taped to the front of the shabby house she shared with them, she knew it was bad news."

Elizabeth will be spending her Christmas break at the Winterhouse Hotel while her Aunt and Uncle take a vacation.  At least they left her some clothing in a grocery bag,  a few measly dollars, and a bus, and train ticket to get her there.  Once Elizabeth gets underway, she encounters an odd couple dressed all in black, who upon their arrival at the hotel, introduce themselves as the Heims, booksellers of old rare books.  They give her a cryptic warning that Mr. Norbridge is a book thief, but after meeting Norbridge Falls, she's skeptical about their story.  Norbridge then takes her on a grand tour of his hotel and it's one of a kind library, upon exploring the library further she finds a one-hundred-year-old book.  Then she meets Freddy Knox, a boy her age whose parents also sent him to the hotel for the holiday.   Freddy's been coming to the hotel for years and doesn't mind because Norbridge always gives him special projects to work on, like turning walnut shells into fuel.  Elizabeth and Freddy soon discover they share a passion for puzzles, anagrams, and word ladders and while planning a special scavenger hunt competition they find a painting.  Within the painting, there seems to be a secret message written with a Vigenere Square, but without the encryption key, they won't be able to figure out what it says.

Winterhouse is the first book in the trilogy by debut author Ben Guterson, it has the feel of Greenglass House with all of its various rooms to explore, a mystery to solve and puzzles.  Each chapter has an interesting title as well as a word ladder going down the page and it is split into three sections/books.  The puzzles were challenging and the mystery surrounding the painting and antique book definitely hold your interest.   You can even try your hand at decoding one of the puzzles using a Vigenere Square, which was pretty tough until they found the keyword that the puzzle was based on.  Elizabeth is such a delight, she's a bibliophile and keeps lists like, "Reason's Why I DO NOT Like my Aunt and Uncle."  She has these "feelings" or strange occurrences as she likes to call them where things just sort of happen around her without an explanation.    For example, a gate might close for no apparent reason.   She tries hard to be optimistic, but living with her Aunt and Uncle for the past seven years has been challenging for her.  What she wants most of all is to have a friend.  Freddy is logical, practical and understanding, they're pretty equal in their puzzle-solving abilities and I really enjoyed how they challenged each other to competitions over breakfast.  It was kinda sad when they had a huge falling out midway through the book, but eventually, they resolved their differences.  I really enjoyed Guterson's descriptive writing like this one,

"a wonderful aroma of something sweet like sugar and fire-smoke and candles all rolled together-lingered in the air."

And the way that the plot was slowly revealed while rooting you in the setting and the uniqueness of the hotel its surroundings and guests, "round tables rimmed with gleaming place settings, huge windows that allowed views of snow-heavy trees and distant peaks, hundred candled chandeliers strung across the ceiling, and a stone fireplace at the far end that was crackling with a haystack of logs."


There are lovely black and white illustrations by Chloe Bristol and overall this was a very enjoyable mystery.
Posted by Brenda at 7:00 AM