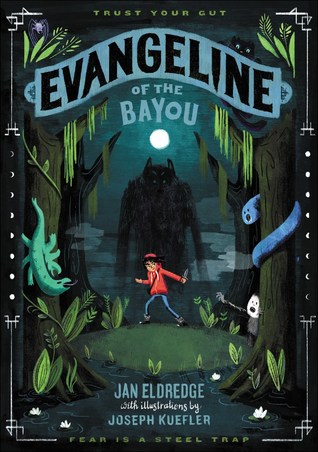 Evangeline of the Bayou by Jan Eldredge illustrated by Joseph Kuefler
Format:  Hardcover
Publisher: Balazar & Bray
Number of pages:  320
Publishing:  May 1st, 2018
Source: In exchange for an honest review a copy of the book was received from the publisher.

Opening Line:  "They say if a sparrow taps at your window during the night, it's a sure sign death is near."

Twelve-year-old Evangeline Clement has always dreamed of following in her Gran and mothers footsteps to become a haunt huntress.  In Evangeline's family haunt huntress skills are usually passed from mother to daughter and manifest on their thirteenth birthday after finding their animal familiar and when their special powers are revealed.  Those who don't express the skill are a "middling,"  without powers.   Despite a few mishaps in the past, Evangeline feels she's ready to tackle a banshee, nixies or even a Johnny revenant.  Afterall, Gran's the best haunt huntress there is and Evangeline should know cause she's been training with her for years.  If only her animal familiar and powers would emerge, she knows she could earn her silver talisman from the Council.  But when Gran agrees to a job in New Orleans to help Mrs. Midsomer, who has taken ill with an unexplained medical condition and Gran is injured herself, Evangeline has to step in and take charge.  Complicating things is a Rougarou lurking in their mists, a fierce creature whose bite on the next full moon will change you into a werewolf, is Evangeline prepared for the challenge?

I really enjoyed the setting of the Louisiana bayou, the atmosphere of the swamps thick with cypress trees, and "foggy mist, croaking frogs, and bugs chirping."  References to golden catfish, hush puppies, and especially the beignets from Cafe Du Monde.  Definitely a sense of place and the magic of the South.   The first part of the book centers on Evangeline's first assignment to banish a banshee.  It introduces the concept of a haunt huntress, some of the typical supernatural creatures that Gran and Evangeline hunt, and the tools of the trade, everything from powdered beetles to dried fish eyes.  In New Orleans, Gran and Evangeline meet Mr. and Mrs. Midsomer, and their son Julian.  At first, Evangeline and Julian don't hit it off.  Julian can be rather blunt and asks lots of questions.  He likes things orderly, regimented, and he's happiest when he keeps to a strict schedule.  He's also very intelligent, logical and so has doubts that Evangeline and Gran can figure out what is ailing his mother.  To Julian, a swamp witch or haunt huntress is nothing more than a "smoke detective or faith healer."  Despite Julian initially appearing rude to Evangeline, she is determined to do her job and because of her tenaciousness, she even manages to win him over.

The city of New Orleans makes the perfect backdrop for the legendary Rougarou.    In the story, the identity of the alpha is part of the mystery, little hints to possible suspects are given, but the reader is left guessing as to which character it truly is.  There are also revelations from Evangeline's families past that might hold the key to destroying the Rougarou.  Going in I didn't know the story would include werewolves.  Aside from a few movies I've watched, it's the first book on the topic I've read.  I actually found myself enjoying the setting and even the magical elements of New Orleans.  There's a special trip to Papa Urbain's shop to purchase a gris-gris bag and a prediction from the voodoo priest that two people are about to die adding to the supernatural mystery and suspense.  Most of all I enjoyed Evangeline and her silver-tipped gator-skinned boots, she's smart, feisty, eager to prove that she's not a "middling" and make her Gran proud.  At the end of the book, there is a glossary of monsters, ghosts and assorted supernatural entities included in the story.

Favorite Line:  "It's when we start to believe our doubts that we fail at the things at which we should succeed."
Posted by Brenda at 9:57 AM