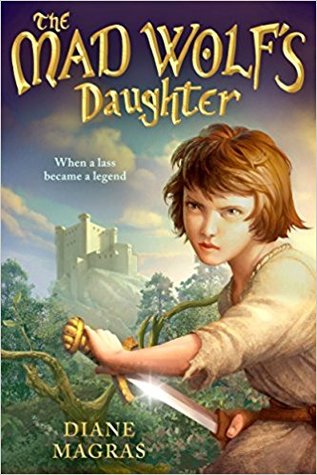 Opening Line:  "The fog drew back upon the dark sea and revealed a gleaming point like a ship's bow, which seemed to nod at the girl brooding by the glowing bonfire."

Drest, her father, The Mad Wolf of the North and brothers Gobin, Nutkin, Uwen and the twins Wulfric and Thornskill were gathered around a fire only to be ambushed when Drest's family doesn't heed her warning about what appears to her to be an approaching ship.  While the invaders are battling her siblings, Drest's father orders her to run and hide.  At first, she listens but Drest finds it too difficult not to do anything when she witnesses them being captured.  She then races along the shore trying in vain to catch up with the ship they're being held on, only to have it set sail carrying her family away.  While clambering across the rocks, Drest spots a young knight (Emerick) being pushed over a ravine, he appears to be badly injured and trapped at the bottom.  Drest rescues the knight and hopes to exchange him for her families release or at least interrogate him for where they were taken.  It takes some time, but Emerick agrees to lead Drest to Faintree Castle, where they're being held and due to be hanged in five days.  Armed with her hostage, Drest and Emerick begin their adventure across the Scottish countryside but each new village and person they encounter leads to more obstacles to overcome and Drest is learning more about her family than she ever knew before.


The Mad Wolf's Daughter was a book I found out about through The MG Book Village, a group of authors and teachers sharing their enthusiasm for all things middle-grade online.  The Mad Wolf's Daughter was selected for June's MG at Heart Book Club discussion and seeing as it was in the library I decided to get an early start.  So far I've read and loved some of their other selections, LOVE SUGAR MAGIC by Anna Meriano and THE VANDERBEEKERS OF 141ST STREET by Karina Yan Glaser, and am still trying to get a copy of  THE PARKER INHERITANCE by Varian Johnson in time for April's discussion.  I really enjoy how they strive to pick "diverse protagonists, authors, and formats, with a focus on recent books, usually from debut authors."


The Mad Wolf's Daughter reminds me a bit of Disney's Brave, maybe it's that they both take place in medieval Scotland, or that the main characters have a tomboyish quality that I would've identified with back in middle school.  And I know I would've loved Drest's short hair and that she is a member of her families Warband rather than a princess like Merida.  She's also so wonderfully smart, resourceful and very determined.  There's a feistiness to her that I appreciate.  Family is really important to Drest and why she doesn't hesitate to embark on their rescue when they're captured.  Drest's family has a strong code that they live by, with the protection of matrons and maidens being one of their most important ones.  Drest takes this to heart when she jumps into a battle to save a young boy being bullied by six boys or intervenes when a witch is about to be burned by a mob of villagers.  At first, her actions may seem a bit rash and impulsive, but she leaps into action because it means her actions are living up to the responsibilities of the family code, and she believes it would make her family proud.

Later in the story, Drest faces a personal challenge of having to reconcile her father and brothers actions with what she learns from the villagers that she encounters along her adventure, and how their actions may have been contrary to what she's been taught.    It's difficult to not feel welcomed into the village and hard to distinguish which side of the story is correct.  She wants to believe in her family first, but when a bandit begins to stalk them and leads them to the town of Birrensgate, everything she thought she knew is shattered.  A tough choice between believing in your family and looking at all of the facts.  Over the course of the story, Drest grows and develops into this fearless heroine with responsibilities and duties that she doesn't shirk or run away from, she becomes a friend to Emerick and a legend around the countryside.

I adored Emerick and Tig, the two characters aiding Drest on her adventure.  This was one of my favorite parts of the story, the transition of Emerick being Drest's prisoner to becoming her friend.  They're such a fun pair.  I particularly enjoyed this dialogue between them.

"He glanced at her face and stared "God's bones, you're a lass."  "You say that as if I'm a three-headed goose.  Have you never seen a lass before?"  "I've seen many, but never one like you.  What was your mother?  A banshee?"  Drest scowled.  "I don't know who my mother was.  But if you insult her again I'll drop you."

There is an author note at the back of the book which provides detailed information about medieval Scotland including Feudalism, Village Life, War-bands, Women, Healing, Castles, Swords, the Landscape, and even an explanation of the origins of the characters names.  It was fascinating to read about the role of matrons and maidens in Scotland, and the way in which Magras tied all the information back to the story, like how Drest's using a sword wouldn't have been typical but that many other young girls might have used a longbow during this time period.   The Mad Wolf's Daughter has it all, historical time period, action, fantasy adventure and lovely moments of reflection, family, and friendship.
Posted by Brenda at 7:00 AM

This has been on my list since I first heard about it! So glad you enjoyed it :)

Hope you get a chance to read it, such a fun book.

I just heard about this book too when the author contacted me to be on my blog. It sounds fantastic. Glad you liked it.

Hope you get a chance to read it Carol, thank you for stopping by and commenting.

Same as Jessica, this went on my TBR the first time I heard of it. Your reviews reminds me of all the book's appeal factors! I will try to get to this one over the summer.

I have been seeing this book all over lately- but this is the first review I've read. Sounds like an amazing book. I will definitely be adding it to my list. I haven't seen Brave- but I can see how there are similar elements between the two. :)
~Jess