MG Fantasy/Adventure Review: Aleks Mickelsen and the Call of the White Raven by Keira Gillett, illustrated by Eoghan Kerrigan 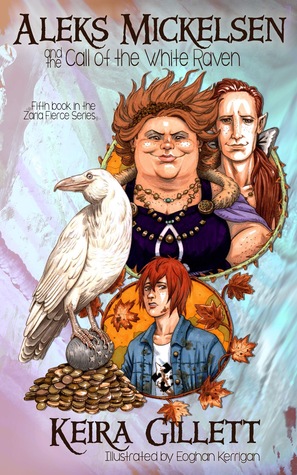 Aleks Mickelsen is a changeling or fairy who's been happily living as a human boy.  With less than two weeks left until his sixteenth birthday, Aleks faces the decision of whether or not to leave his fey abilities behind and become a human forever.   At the end of the previous book in the series, Aleks and his friends had just found out from his sister Nori that Fritjof (a very mean dragon who's been hiding his tracks by erasing the fey's memories of his return) is trying to escape from the Under Realm.  Since then Aleks and his friends have been searching for the Lost Well or entrance to Niffleheim,  but Aleks' navigational skills have been failing and once again they're hopelessly lost.

The story picks up with Aleks being woken up by Airi, the white raven who formed a special bond with him in the previous book.  Airi snatches the stargazer (the instrument that has frozen time back home) out of Filip's hand and then takes off leading everyone on a wild aerobatic race across the skies to recover it.  Miraculously, Airi ends up leading them to the Lost Well.   It's long been held that whoever finds the Lost Well and puts their claim to it will rule over the four fey courts.  If her wish is granted,  Nori hopes to be the one to reunite the courts.  Yet, the Lost Well might have plans of its own as to who the next ruler of the fey should be.

Aleks Mickelsen and the Call of the White Raven has plenty of action and adventure, and I love the way in which these characters and their relationships have developed across the series.  The story really starts to take off as Aleks and his friends make their way toward the Autumn Court.  First, they are attacked by Saskia of the Winter Court and then walk into the middle of a coup attempt to overtake the Autumn thrown by Nori and Aleks aunt and uncle, Cornelia and Ytorm.  To avoid being seen they try to sneak into the Great Fox Hall, only to be captured by Aleks cousins Isak and Eskil,  who plan to force them to reveal the location of the Lost Well or face having their friends killed.    As a part of bargaining for their release, Aleks agrees to compete in "The Trials," a competition in which he is placed in an Oubliette or underground dungeon, with the only exit being through the ceiling.  He only has twenty-four hours to free himself, rescue his three friends and return to the Great Fox Hall, with a riddle as his only clue to his friend's whereabouts.

The Trials reminded of the second task that Harry faced in The Goblet of Fire when his friends were being held underwater by the Merpeople.  In Aleks case, he needed to find the places that his friends are being held using the clues he was given by Isak and Eskil, which is no easy feat.  In one case he also needed to decipher the runes outside of a door in order to open it.  This was my favorite scene in the story, mostly because my kiddo and I have been exploring Norse runes lately, including the Helm of Awe or Ægishjálmr, so it was fun to see them mentioned here.  Gillett's books always include lots of action and strong themes of friendship which I really adore.  While this book is focused on Aleks conflicting feelings about whether he wants to be fey or human and how his return to Neiffleheim has raised many problems for him, not least of which that all changelings are to be killed on sight, there are still many lovely scenes including all of the other characters from earlier novels.  There are even budding romantic interests developing between Aleks and Saskia, Filip and Zaria, maybe even with Christoffer and Nori that was sweet and reminiscent of middle school crushes.

Aleks Mickelsen and the Call of the White Raven is also filled with these beautifully detailed black and white illustrations by Eoghan Kerrigan at the beginning of each chapter heading.  I love the combination of the text and art and how it not only develops the new characters added to the story but also highlights specific events coming up in the chapter.  Each one is so intricately detailed, with the illustration of Airi the white raven being my favorite.  Be aware that this ends on a gripping moment that will have you clambering for more, I know I can't wait for the release of Aleks Mickelsen and the Eighth Fox Throne War coming toward the end of this year.
Posted by Brenda at 11:21 AM

Can't wait to read your thoughts, enjoy that ending :)