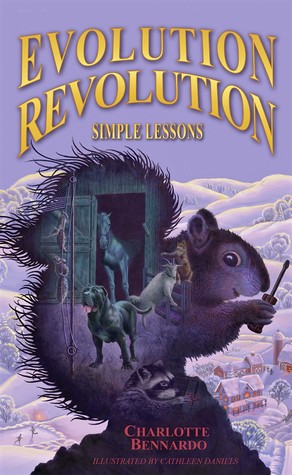 Number of Pages: 154
Published:  July 19th, 2017
Source: In exchange for an honest review, a review copy was received from the author.

In Simple Machines, we were introduced to Jack, a squirrel, and Collin a boy who recognizes Jack's intellect and teaches him how simple machines work, together they hatch a plan to try and prevent humans from further encroaching on the animals habitats.   As a true leader, Jack is able to gather an army of woodland creatures and ultimately they destroy the machines.  In Simple Plans, their victory is short lived when Jack's friend Rat is captured by the scientists who are still angry about their machines being destroyed and who plan on catching him to figure out how he accomplished it.  In Simple Lessons, Jack is still very much in danger of the scientists, who've been showing up at Collin's house asking questions and even placing elaborate traps and camera's in the woods.  Recognizing the danger, Jack tells his friends to leave the woods.  Fearing for Jack's safety as well, Collin agree's with his mother's plan to take him to an animal sanctuary far away from his home.  It's here that Jack meets Addy, a fellow rescue squirrel and realizes that what he really wants is his freedom and to teach the other squirrel's what he has learned.  However, the scientists are still on his trail and once again he will have to figure out how to outsmart them once and for all.

One of the things that I've so enjoyed in reading Bennardo's Evolution Revolution series is the way that she portrays her animals, the attention to detail to capture their mannerisms as the run, jump, and scamper through the trees. They act similar to the squirrels that I see in my trees and still face all the same dangers from predators in the wild like a fox, cat, and hawks, and of course those tricky humans.  I also like that despite Jack not being able to communicate directly to Collin and his mother with words, that they use Collin's drawings and Jack's friend, Mina the mynah bird and her mimicry ability to learn the same vocabulary to communicate.  Jack is such a wonderful character, he loves learning from Collin and cares deeply about the creatures in his woods, his friend Rat, his sister's mate and once he meets Addy and the other rescue squirrel's he's committed to helping them be free too.  Jack often places himself in grave danger to protect them, but somehow he always comes out on top.  Each of these stories is packed with humor, adventure and are just the right length for a classroom read along and I wouldn't hesitate in giving this to an animal story loving kid.  The lovely illustrations are by Cathleen Daniels, and this one is one of my favorites from a previous book, so gorgeous!

Charlotte Bennardo is the co-author of the Sirenz series (Flux) and Blonde OPS (Thomas Dunne Books), hailed as “funny and entertaining” by Booklist. She resides in New Jersey with her family and is currently hard at work fighting for chair space with her cat as she works on her next project.