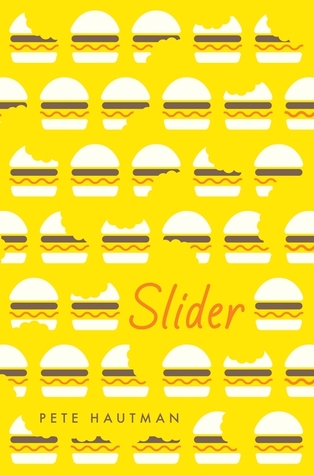 Opening line:  "A sixteen-inch pizza, fresh from the oven is a thing of beauty."

Slider begins with three friends playing a friendly game of who can eat a pizza the fastest, with David trying to come closest to his favorite competitive eaters, Joey Chestnut and Jooky Garafalo's time.   Then a simple online search leads David to an auction for the infamous half hotdog that caused Jooky to lose the World Famous Nathan's Hotdog Eating Contest.  David can't believe the half hotdog hasn't even received one bid, so he places a small bid, which quickly grows.  Fearing he might lose the auction, David borrows his mother's credit card and sets an auto-buy with a limit of twenty dollars hoping to snag himself a piece of history.  But when there's a mishap with the auction system, David lands himself with a $2000.00 charge.  To cover the cost of his mistake, David plans to enter as many contests as he can to raise the money to pay his mom before she finds the charge on her credit card.  What ensues is a lot of competitive eating.  Everything from SooperSlider's to pizza's, to heads of cabbage to stretch out David's stomach.  Training is tough and at first, David's parents aren't supportive of the idea, but then they come to an agreement where David will take care of his younger brother Mal and they agree to sign his application to participate in the Pigorino Pizza Eating Contest where hopefully he can win the $5000.00 grand prize.

So, I'm new to the idea of competitive eating and I'll admit I had a similar reaction as David's mom, thinking of all the damage that eating so much can potentially do to your body, but Hautman kept things light and funny.  Slider is about much more than just competitive eating, it's also about David's relationship with his younger brother Mal.  Mal has autism, which for him includes difficulty socializing, communicating, and behavioral challenges, but to his family, who don't use labels, he's just Mal.  Mal may keep a wall of his things and occasionally have an outburst, but his family loves him and David's attempts to help Mal's socialization were both clever and really sweet.   David is such a wonderful character and one I believe middle graders will easily relate to.  He's searching for his place as the middle in his family, describing it as "...being the beef in a SooperSlider-you're just there to weld the bun together."  In a lot of ways, the middle kid gets overlooked, and in David's case, this is pretty true too.  His older sister gets all the positive attention from doing well in school and Mal requires lots of attention from everyone in the family, which leaves little attention for David.  Somehow, David takes this in stride and I found myself rooting for him the entire story.  Slider also delves into how relationships change between friends, as Cyn and HeyMan begin to show an interest in one another.    Overall, this was a unique, humorous story that has plenty of kid appeal.