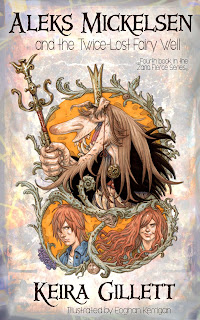 If you've been following my blog, you'd know how much I've enjoyed reading Keira Gillett's Zaria Fierce Series and was so happy to hear that things continue with Aleks Mickelsen. Keira is such a lovely writer and quick, I mean she prepared this post so fast and happily agreed to chat about her writing process and interesting facts about her newest series without even batting an eye.   Thank you once again, Keira!


Hi, everyone! It’s good to be back at the Log Cabin Library. Thank you, Brenda, for having me. My name is Keira Gillett and I am the author of the Zaria Fierce Series, which follows a biracial girl around Norway as she discovers her heritage and magical gifts for the first three books. The next three books will be told by her friend Aleks Mickelsen, who is a changeling, the first of which is Aleks Mickelsen and the Twice-Lost Fairy Well. I thought to share some of the interesting behind the scenes aspects of the book and my writing so you can get a feel for the world and me. Let’s dive in!

1.  Opening sequences:  I wrote and took out a few more incidents in the beginning sequences, including where the kids learn about a factory worker getting hurt in a senseless accident. Taking these additional things out sped up the opening pace of the book and got the adventure started much sooner. I’m always aware of my sister’s comment in the back of my mind where she said that as a kid she didn't like reading because books took too long to go anywhere, so I always try to get the gang out and on their way within one to three chapters.

2.  The Crash: The crash sequence took many rewrites. In its first iteration, Geirr had a near-miss with another plane. In its second, the type of airplane being flown changed after discussing things with a retired FAA inspector/pilot and talking about how it might have gone down. Svein also entered in this revision as I was informed that many pilots hang around the flight ops (operations) office and offer to tagalong for fun.  In its third, the plane type changed again after talking with an A&P (airframe and powerplant) mechanic about what she considered believable for the crash so that everyone would be safe. Then it was a few more rounds of polishing up to get to the final version in the books. I hope I did both the pilot and mechanic justice. Any and all errors are on me, but I’ll call those artistic licenses.

3.  First Draft: I completed the first draft of Aleks Mickelsen and the Twice-Lost Fairy well roughly a year ago in August 2016, which took me 1912 minutes to write. Originally Aleks’ first story sat on 39,400 words and 211 pages. It ended at 47,720 words and 272 pages. I find that I’m the opposite of many authors when it comes to word count. Instead of ripping words out of the story by the thousands and focusing on brevity, I’m adding them in to flesh out the world and clarify what I mean to say.

4. Knottie – Knotty/Naughty as a nickname came first. I then went looking for a Norweigan name for a certain girl troll with attitude, who would epitomize the nursery rhyme of the girl with a curl in her hair who was very, very bad when she was bad, but maybe not the reverse of being very, very good when she was good. She’s prickly and wound up tight. I hope you all love her and Christoffer interactions over her name. They make me giggle.

5. Grizzle: Another new troll name came from the idea of a grizzly bear. Shortening grizzly to grizzle worked out wonderfully because grizzle is hair/fur that is like a salt and pepper mix. It also is a slant rhyme to gristle, which is the tough inedible tissue in meat. Both of these definitions really work for her character.

6. Grandmothers: Hearing Michele narrate for Grizzle, I realized I really do love my grandmother figures in the series and have only one grandfather mentioned, and so far he’s been off-page, this is probably because I was super close to my own grandma. I didn’t really know my grandfathers, who passed away before I really was of age to remember them.  In the series, we now have Ava, who’s hip and cool; Granny who’s sugary sweet and absent-minded; the witch in the woods, who’s a bit crazy, but sly as a fox; and Grizzle, who’s tough as nails so don’t cross her.

7.  Banshees: One of the things I mulled over as I wrote this book was how to incapacitate the banshees in my world. To figure that out I focused on the features I had already described earlier in the series and kept it in the back of my mind as I wrote up to a confrontation with them. The idea when it came was quick and a perfect solution, and in fact inspired by the Biblical accounting in the Book of Judges, of Samson and Delilah, where Samson loses his incredible power and strength when his hair is shaved by her. Silencing a banshee in my world means cutting her hair, and requires an element of skill and another of a surprise because when they focus their full attention on you, it’s you who is incapacitated as seen with the teenage trolls.

8.  Jötunheim: Book four was originally supposed to bypass the trolls entirely, and go to Jötunheim. The trolls, however, had other ideas and ambushed me as much as Aleks and the gang. I always believe following where a plot bunny takes you because there’s a reason these ideas call to you. Never be so stuck on your final plot to overlook these hidden gems. I discovered with the kids that a lot of very bad stuff was happening below the surface in Trolgar and needed to be uncovered. It was amazing to explore and to meet another side of these trolls. As Hagrid from Harry Potter would say, “They’re just misunderstood creatures.”

9.  Voices in my head: It’s not like I hear actual voices, but my characters often talk to me as in the above case where Jorkden and his Wild Hunt appeared on the scene to engineer a story take over. For me, this means that the world is alive and full of vibrant, verdant fields of imagination, ripe and ready to harvest. Some of my very best ideas come from listening to my characters “tell” me why I can’t do what I thought I’d do with them.

10.  Character Development: As the main characters (and others for that matter) get older, and interact with the world around them, it’s important to continue to grow and develop them into new versions of themselves. Characters who are memorable are not in stasis. As an author, I always ask myself, what’s next, what motivates them, what are they afraid of? Then I tackle the answers and bring them to the story.  Zaria starts out the series as a shy bookworm, and she may still be a bookworm and a tad shy about boys and feelings, but when it comes to other things she is fierce and brave and stands up to injustice. She’s a stronger character than she began, finding within herself the strength she’s always had. Her journey was very much about finding her true self. Aleks is the opposite of her at the start, even from the first book. He’s certain who his true self is and what he wants and doesn’t want. He doesn’t want his powers. He wants to be normal. He wants to be human. Where his path takes him, and what he learns along the way – well, you’ll have to read his trilogy to find out.


Thanks for reading! I hope you enjoyed this sneak peek into what goes into writing the Zaria Fierce Series and Aleks Mickelsen and the Twice-Lost Fairy Well in particular. Which was your favorite fact to learn? What else do you want to know about me, writing, or the books? 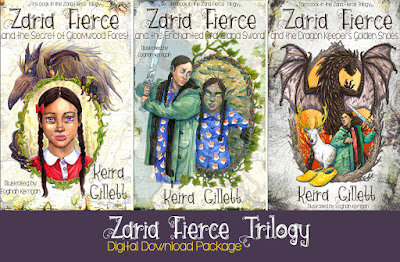 Giveaway: To celebrate the release of Aleks Mickelsen and the Twice-Lost Fairy Well, I’m hosting a giveaway for interested readers. The winner will receive a dragon scale necklace, that I made, and a Dropcard containing a digital copy of Zaria Fierce and the Secret of Gloomwood Forest. Open internationally. Ends 8/20/2017. 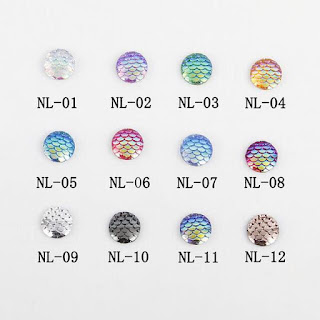 Book 4 in the Zaria Fierce Series

“It’s time for you to come home.”
First Aleks’ mom loses the car keys, which he finds in the fridge, and then Christoffer forgets how to get to Aleks’ house. On the surface it doesn’t seem so bad, but events become more disturbing as the day progresses. Something strange is happening in Norway, and Aleks Mickelsen is the only one who can stop it. Too bad for us, the last thing he wants is another adventure. 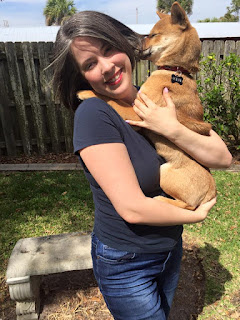 When she’s not working or writing, Keira Gillett loves to play tabletop games. Nearly every week Keira gets together with her friends to play. It’s no wonder she invented a game of her own for her Zaria Fierce Series. You can find the rules to this game within the second book and make your own version of it through a tutorial on her website. She’d loved to hear from you! Why not send her a picture of you and a friend playing the game?
Find her at http://keiragillett.com/

Hi Brenda! Thank you for hosting me again. I had so much fun coming up with this list. I hope it gives readers a fun look into my books. I love Aleks, Zaria, and the whole gang. Sometimes a story just can't end but must keep going. 😊

It was my pleasure Keira.

What a fun post! I really enjoyed all the facts. I especially enjoyed the fact about grandma figures and how you probably included them because you were so close to your own grandma. I was very close to my grandma (Nana), so I can relate to that!

What a fun prize pack. Thanks for the chance to win. :)
~Jess

Thanks, Jess! My one grandmother and I played cards. I loved sleeping over at her place. The other one came to visit once a year and we went swimming and played word games and put together puzzles. I miss them both so much. �� Good luck on the giveaway!