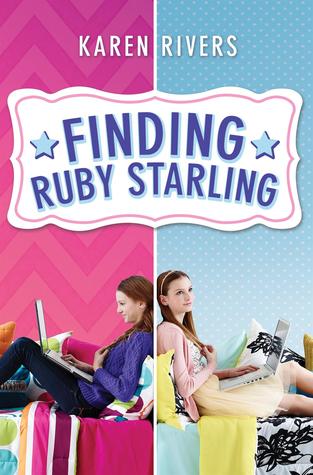 Have you ever gone on Google to look up your name, just to see what shows up?  Well,  Ruth Quayle did a search looking for any images of herself online, only to find images of a girl named Ruby Starling.  Ruth lives with her family in the United States, and Ruby lives in England with her mother.  The images of Ruth and Ruby look shockingly similar, so much so that they could be twins.  Ruth reaches out to Ruby in an email to let her know that she might be her twin.  At first, Ruby thinks that Ruth is some crazy stalker, but slowly the two begin to connect and realize that what they thought was improbable might just be true.

Finding Ruby Starling is told through a series of emails, letters, and Tumblr poems. Most of the emails are sent between Ruth and Ruby, but there are also some to and from their friends and parents.  I found this style of writing interesting but a little long in places.   I would have enjoyed things more if the ending would have included some dialogue of the two together.  It felt incomplete having them continue with emailing even after they met, somehow I was expecting some long conversations. Others, however might not mind this as much as I did.   Finding Ruby Starling has a very MG feel to it and I particularly enjoyed the British versus American slang. I especially liked Ruth's poetry and Buddhist quotes that her and her father share.  My favorite lines were when Ruth was discussing being a leaf on a river ..."not being a path, but being a river.  It means we are all the leaves being pushed along by rivers and we feel like we can't control what happens to us.  But we are also the river!  All the stuff we think and feel and hate and love and stuff is what decides if the river is a terrifying whitewater rapids or just a gentle stream that is perfect for wading where we can bob along in the sunshine, all happy and pretty and safe!"
Posted by Brenda at 1:05 PM

Love this book someone should really make SHORCA!