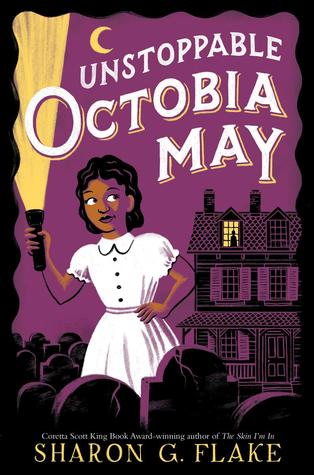 Octobia May lives in the boarding house her Aunt Shuma runs during the 1950's. Aunt Shuma is a progressive women and lets Octobia have free reign to explore the neighborhood, wear pants and gives her what they call "freedom." All the residents of the boarding house are like family to Octobia May, that is except Mr. Davenport. Octobia knows Mr. Davenport is a vampire and she is determined to prove it to everyone else. But, Octobia is also known for having an over active imagination, and everyone knows about her dreams of being a writer and solving mysteries. When a women is killed, Octobia and her friend Jonah start following Mr. Davenport around searching for clues, what they uncover is a mystery.

Octobia sees things with a child like view. She talks about “having been dead once herself”, and is overly fascinated with the idea that Mr. Davenport is a vampire. Mr. Davenport is certainly a mysterious, shady character but there really doesn't seem to be a reason for Octobia to believe he is a vampire. She also drops the idea when the plot of bank robbery and murder begins to unfold, so I'm not particularly sure why the idea was included in the overall plot. However, there were many things to love about Octobia. She is a very high spirited girl, I enjoyed her love for exploration and ventures into the graveyard by her Aunt's house. Octobia also has a wonderful imagination and perhaps Fluke wanted to illustrate her loneliness by having her create this imaginary idea of him being a vampire.  Octobia does create these imaginary servant friends, and entertains herself by talking to the graves of the Before Girls. Another aspect that stands out is Octobia's friendship with Jonah, which was very sweet. I especially enjoyed when she helped him win a bet by kissing him on the cheek. Octobia had a knack for dragging Jonah along as she followed Mr. Davenport, often getting him into such trouble with his mother. I also enjoyed that Octobia had this never take no attitude and helps her new neighbor Bessie overcome her shyness, despite Bessie's father not trusting Octobia. Overall, Unstoppable Octobia May was an enjoyable read containing lots of historical details about racism and inequality, as well as a diverse set of characters to include Holocaust survivors and a child of mixed race.

I received a review copy from the publisher for free via NetGalley for
consideration for the 2014 Cybils award in Middle Grade Fiction.

Hi Tyrean, I don't know if you're familiar with the Cybils but they have a wonderful list of MG fiction this year. http://www.cybils.com/2014/10/2014-nominations-middle-grade-fiction.html Thanks for stopping by.