Today I'm pleased to have Keira Gillett, author of the Zaria Fierce Trilogy visit my blog with her guest post and an excerpt from her latest book, Aleks Mickelsen and the Eighth Fox Throne War.  I've been following her series for a number of years and she's always so kind to share her insights on writing and illustrating.  Thank you so much for dropping by Keira!

First off, thank you so much, Brenda, for welcoming me back to Log Cabin Library! I am thrilled to be here. Some of you may have seen me guest blogging before, but for those of you who don’t know me, my name is Keira Gillett and I am the author of the Zaria Fierce Series. My newest release, Aleks Mickelsen and the Eighth Fox Throne War concludes the second trilogy in the series, which focuses on Aleks, a changeling who just wants to be human and his struggles as forces beyond his control lead him further and further into the fey realm.

One of the things I got to do with this book that I hadn’t done in previous books was illustrate parts of it. Eoghan Kerrigan, the longtime illustrator of the series and I split the interior illustrations 50-50 and threw our creative juices into bringing Aleks Mickelsen and the Eighth Fox Throne War to life. The results I find to be beautiful, distinctive and thought provoking.

With both Eoghan and I working together on this book it reminds me very much of movies, theater, and other arts where many individuals have a hand in creating an overall world and evoking together moods, feelings, and tones to scenes and situations. Both Eoghan and I have artistic educational backgrounds in drawing and illustrating. We have our own style of work and the similarities and differences in our approach to creating works of art are apparent within the book.

Eoghan’s artwork has this beautiful realism to it. He’s a master of shading and has a real love of trolls and fantasy which shines in the series. My work is much more graphic with elements of pattern to it. I also thought I was too close to the project as I write the series and that might make me blind to what readers may really want to see. Circumstances changed, and with a lot of encouragement from family and friends, I was able to easily and quickly put pencil and pen to paper and draw the world that until now I’ve only painted in words. Their subsequent enjoyment of my pieces was a huge confidence boost, and I am proud to display my illustrations alongside Eoghan’s.

From what I gather about Eoghan’s process is that he draws mockups for a piece, then when he’s ready to make it the final piece he uses the mockup for reference and starts by lightly using a colored pencil before he moves to artist grade graphite pencils to complete the piece. My process also goes through stages. I rely heavily on references – be it photography I’ve taken or what I find in my environment (figure or still life) and I always start there. I really miss my access to figure drawing classes, but that’s why one has oneself and a camera. From there, I use graphite pencils, art pens, artist grade markers, and sometimes a touch of Photoshop to complete the work. 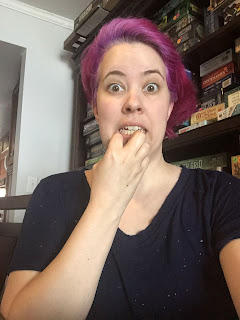 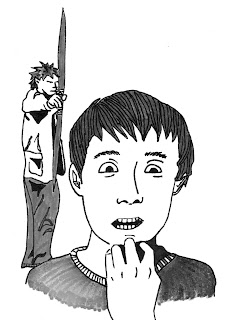 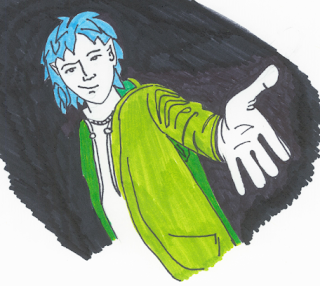 What is fun and weird about my art is seeing it before and after I’ve prepped it for the book. Before in person, you will see white and black, yes, but also all sorts of odd color combos like plum purple or robin egg blue hair, yellow wings, powder blue or orange pants, and green jackets. This is because I didn’t have enough tones and shades of gray in my marker set and rather than going out to test and buy those colors, I created a reference sheet, then using my phone converted it to black and white. With it always handy, I know exactly what color to pick to get the shade of gray I want the computer to see when I scan and convert the drawings to grayscale. 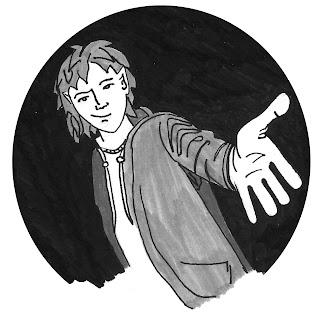 The biggest highlight in illustrating my work is the immediacy of it. What’s in my head I can bring out whenever the mood strikes. Unlike Eoghan, as the author, I don’t have to have the book fully written before drawing something as I know what is coming next. It’s also great for me when the writing muse is a little shy to switch gears and keep the creative juices flowing by working on the artwork. I currently have nine chapters drawn for book seven, and about seven and a half chapters written. As they say, a picture is worth a thousand words – now if I could translate the art into text I’d be even closer to completing that first draft!

I hope you enjoyed this little foray into the artwork of Aleks Mickelsen and the Eighth Fox Throne War. Be sure to grab your copy today to enjoy all the illustrations and adventures that come with them. 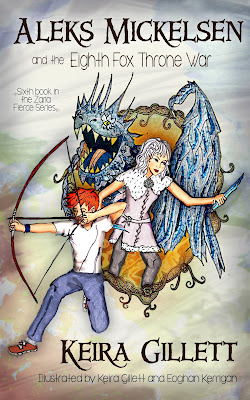 Book Summary:
Newly proclaimed king over all fey, Aleks Mickelsen is a changeling with a lot on his mind and many enemies breathing down his neck. The fey realm of Niffleheim is rife with danger everywhere he looks. A terrible dragon by the name of Fritjof is intent on causing chaos, pitting the fey against each other and starting an interspecies war for the chance of gaining his freedom. Aleks’ biological father wants him to abdicate the throne before his coronation, or else. All that, and he has to impress the father of the girl of his dreams. What’s a bloke to do?


Excerpt:
Emerging from the bowels of the fey realm, Aleks led the way to the Autumn Court. It was probably unnecessary at this point to take the lead, but as the group’s navigator, it was an ingrained habit. They hadn’t made it very far into the plains, when spears with sharp, narrow heads thunked point down in the ground all around them, trapping them in a circle.

“We have to keep creating distance,” Henrik said, grabbing a spear from beside him and lobbing it back.

The dwarves raised round wooden shields, deflecting the attack. As more joined them, the women spread out, spears and axes ready in hand.

“We’re sitting ducks,” Zaria shouted, zapping a hooked spear away from her. It disappeared into thin air, arriving where Aleks knew not.

A set of spears – one barbed, one hooked – shot toward her. She did the same to them as she had the first spear, and retaliated by tossing a fireball at the brigade. They ducked, throwing up their shields, but Zaria once again purposefully aimed high to avoid hurting their foes. She and Aleks did not want a war on their hands. They were trying to diffuse one.

“We have to snuff our lanterns. It’s the only way!” cried Filip. “Turn off your stargazer, Aleks.”

He did, clicking a button within a star cutout on the egg-shaped device. His friends likewise darkened their lanterns, deliberately shattering them against the ground. After a brief flare of light as oil and fuel burned bright, the world went dark, and Aleks had to clear spots from his vision.

It was still night, sometime past midnight, and all was pitch black. The scalloped icy ceiling over the plains offered no hint of recourse. In an instant, the tide had turned, and their attackers were on the defensive. The all-female dwarf unit came to a stumbling, crashing halt.

Aleks couldn’t see it, but he pictured the scene like one of the cartoons he had watched growing up, with one soldier running into another and causing a chain reaction, sending everyone toppling like dominos.

Dwarves shouted and groaned, hurling insults at one another like they hurled spears. Some hit their marks with deadly accuracy, as barbed as some of the real spears lobbed in their direction. Wounded egos and pride ripped through the troop, tumbling them into chaos.

The Ravagers had relied on the light generated by Aleks and the others to direct their attacks. Without it, the soldiers were as blinded by the darkness as Aleks and his friends. Try as they might, none of the female warriors could move for knocking into someone or tripping over the uneven ground. Unlike the dwarves, however, they stayed quiet, essentially becoming invisible to any straining ears close by.

Zaria touched his sleeve, making him jump. “Easy,” she whispered, leaning close. “Do you think you can lead us in the dark?”

Aleks’ fairy power was the ability to navigate on instinct. He always knew where he was going… well, he used to know. Lately, his magic wasn’t always right at hand, and he’d unwittingly taken his friends down many wrong turns and paths; but, they’d always forgiven him, and somehow they’d always ended up right where they were supposed to be. He knew without asking they all had his back.

The inner debate roiled in him. Could he lead them? Glitchy powers or not, Aleks felt certain he could. This was a path he’d taken before, so he had a pretty solid idea of what to expect and where to go. Instead of giving a verbal answer that might give away their position to the nearby dwarves, he took Zaria’s small, slender hand in his and tugged her forward in the dark. She understood him, like she always did, and followed without hesitation.


About the Author: Keira Gillett 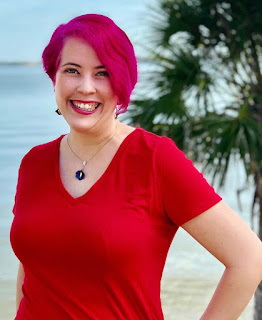 Keira Gillett loves painting stories with words and pictures. She received her Bachelor of Fine Arts in Drawing and Painting from the University of Florida and has been in multiple exhibitions. When she’s not working, writing, or illustrating she loves to snuggle with her doggie, Oskar. Like Aleks, Keira wishes she could understand her pet. If only Oskar could talk like Airi! You can follow their antics on Instagram with the #oskarpie hashtag.

It’s so wonderful to be back at Log Cabin Library. Thank you again for having me. If anyone has any questions about the books let me know and I will be around to answer them. 😊

I write with a co-author, but drawing with someone else sounds different and interesting too. I don't know if I have read anything illustrated by two artists before and I am intrigued for sure. I can understand Keira initial feelings about illustrating her own work. Glad she decided to do it. What an interesting post. Wishing her the best!
~Jess

Thanks Jess! It's not quite like writing with another person, where there's more back and forth, but it has certainly been a lot of fun. :D