MG Fantasy Review of The Collectors by Jacqueline West 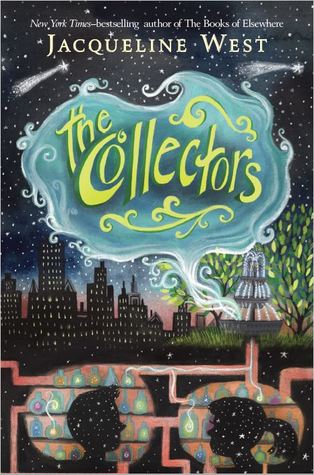 Opening Line: "The spider dangled above the table."

I'm a huge fan of West's Books of Elsewhere series and am always excited to hear when there is a new book coming.  West is one of my auto-buy authors.  Then I saw The Collectors pop up on Edelweiss, so I quickly requested it.  I can't wait to receive my hard copy when it comes out in October and read it all over again.

One of the things that I absolutely adored about The Collectors was the first chapter.  The wonderful image of the spider dangling from the ceiling and our first glimpse at the premise.  Such lovely descriptive passages that really capture your interest.  The way the story has you questioning wishes.  Whether all wishes should come true.  Sure it's wonderful to wish for ice cream with dinner and have it come true, but what if a wish could be dangerous and needed to be stopped?

Coming from a background in speech-language pathology, I also really appreciated the inclusion of Van, a young boy who is hard of hearing and who wears hearing aids.  West accurately describes Van's difficulties in communicating with people when they, for example, don't face him as they're speaking or when they speak too rapidly making it difficult for him to read their lips.  There are many examples in the text of Van using the context of a conversation to decipher what the speaker is saying, thus giving the reader a better understanding of what it's like to have a hearing impairment.

Eleven-year-old Van (short for Giovanni) currently lives in New York City with his mother, the famous opera singer, following their many travels all over the world.  Van's gotten pretty good at being the new kid at school and spending time on his own, but he still would very much like a friend.   Van loves to collect things that he finds, a blue glass marble, discarded toys, little things that go unnoticed by most.  Van's also really observant.  Like the day in the park where he was watching a man flip a coin into the fountain and a squirrel came flying out of the bushes followed closely by a girl.  Drawn to the girl, Van tries to strike up a conversation, only to have the girl and squirrel disappear when his mother comes calling after him.   Later Van sees the mysterious girl (Pebble) and squirrel (Barnavelt) from the park again and this time he follows them to an odd building belonging to the mysterious group called The Collectors.   After being caught trespassing, Van is tasked with finding out information about another collector, Mr. Falborg and reporting back his finding to Pebble.

Here's where the story gets really interesting.  Mr. Falborg invites Van to his home to view his many collections.  Once inside, Mr. Falborg shares one of his prized collections, his Wish Eaters, little creatures who have the power to make wishes come true by eating them.  Mr. Falborg gives Van his very own Wish Eater and cautions him about the Collectors wanting to imprison all of the Wish Eaters.  Now Van becomes very confused.  On the one hand, there are the Collectors who maintain that Wish Eaters are dangerous whereas Mr. Falborg insists he only wants to protect them.  There is lots of ambiguity regarding who's the good versus the bad guys, and whether all Wish Eaters are dangerous or not, which will hopefully be answered in the sequel.  Now if only I could figure out the wording to safely make my wish for news about its release date.  Guess I'll just have to be patient.
Posted by Brenda at 7:00 AM