Longburrow The Gift of Dark Hollow (The Five Realms #2) by Kieran Larwood, Illustrated by David Wyatt 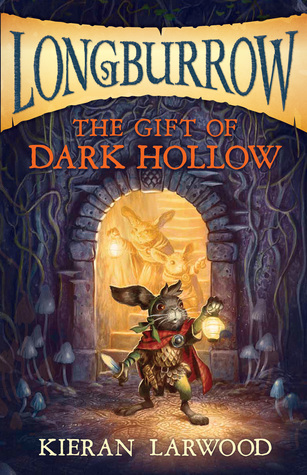 Opening Lines:  "He still dreams about them sometimes.  Nightmares that leave him wide-eyed and gasping with fears sixty years old pounding fresh through his blood."

In the first book of the series, Podkin and his siblings, Paz, and baby brother Pook fled from Scramashank, the leader of the Gorm army, a group of warrior rabbits with iron infused bodies.   After the Gorm invaded the sibling's warren, killing their father and capturing their mother, the children barely escaped with Starclaw, a magical dagger and one of the ancient Twelve Gifts.  Continuing to be pursued by the Gorm Lord, the siblings made their way to Dark Hollow along the way being joined in their quest by a healer rabbit named Brigid and a blind warrior named Crom.  Together they devised a rescue plan to free Podkin's mother and were successful in fighting back the Gorm when Podkin chopped off the foot of the Gorm Lord.
The Prologue of The Gifts of Dark Hollow begins with a rabbit waking from a nightmare, restless the bard contemplates leaving the warren when a young rabbit named Rue sneaks up on him.  Rue has all the making of an apprentice bard, so the older rabbit agrees to help find a teacher for him at the Festival of Clarion, a gathering of the bards from across the Five Realms each Spring.  As the bard and Rue make their way across the countryside, and to distract the young rabbit from asking so many questions, the bard begins to tell him the story of Podkin and the Gift of the Dark Hollow.

After the events in the first book, The longburrow of Dark Hollow became a refuge for all of the local warrens.  Food was scarce with winter approaching, but all the rabbits banded together.  Podkin's mother and aunt had somehow fallen into a deep slumber and were being tended to by Brigid.  Scramashank was most likely still on the hunt for Podkin, but for the meantime, the warren was safely hidden within the Grimheart forest.  Podkin was getting very bored and a bit discouraged that he wasn't included in the War Council with Crom and the other rabbits.  He fancied himself a hero after his last encounter with the Grom Lord.  Curious as he was, Podkin then ventured into the depths of the Temple of Hern where he found the chieftain's hidden throne room and Moonfyre, the lost Gift of Dark Hollow.  Moonfyre granted Podkin the ability to teleport between dark shadows where he managed to overhear a conversation about the location of a powerful artifact hidden by Priestess Comfrey.  Unfortunately, the priestess was currently being held captive by the Gorm army, but if Podkin and his friends were able to rescue her they could recover the Surestrike Hammer, a new weapon to help them defeat the Gorm.

The Five Realms series has the feel of a story being told around a campfire.  Each book is told from the vantage point of an old bard, with the first book centered around a holiday gathering and the second a tale told while the bard and his new apprentice travel across the countryside.  Occasional the bard pauses his stories of Podkin One-Ear to converse with his audience,  in this case, Rue.   The writing style so reminds me of Brian Jacques Redwall series with our hero Podkin One-Ear and his band of daring rabbits trying to fend off the evil Gorm army by acquiring magical weapons and going off into battle.  The black and white illustrations by David Wyatt are gorgeously detailed and  I especially loved the ones of Zarza the bonedancer, a new character added to the story. I'm really looking forward to the next book in the series.
Posted by Brenda at 11:30 AM