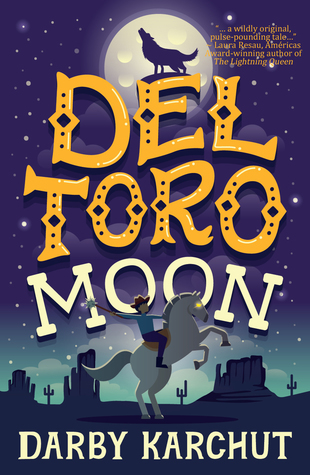 Del Toro Moon by Darby Karchut
Format:  E ARC Publisher:  Owl Hollow PressNumber of pages:  256Publishing:  October 2nd, 2018Source:  E ARC received from the author in exchange for an honest review
Opening Line:  "Worst thing about riding point on my first hunt?  Waiting to find out if I was going to die on my first hunt."


When Darby Karchut contacted me about reading Del Toro Moon it was the cover and description that initially struck my interest, it has a western vibe that I found really appealing.  Then I learned Darby lives in my hometown of Colorado Springs and the setting of the book is Huerfano, Colorado (a county located in Southern Colorado) and I was hooked.

Twelve-year-old Matt Del Toro and his family are a part of a legendary order of knights that dates back to the sixteen hundreds when the Queen of Spain tasked their ancestor Santiago Del Toro with bringing a coffer to the New World.  Housed inside were these creepy wolf-like creatures called skinners.  Santiago stayed in the New World guarding the town against any of the creatures that may escape, a task the Del Toro's have continued even to this day.  Except now the creatures have increased in number and have been intensifying their attacks.

Del Toro Moon is an action-packed story with plenty of scenes where Matt and his family are slinging their mace, striking down the skinners causing them to vanish in thin air.  And boy were the skinners creepy, this description is pretty accurate, creatures that look like "a bloodied, fresh-skinned carcass."  Not something you'd want to come up against in the desert.  I really liked Matt, he wants his father and brother to take him seriously and despite being new to the task of hunting skinners, he really wants to show he has the skills to make a good fighter.   It's not easy being the youngest, having a father who is a legend and a family history to live up to.  Not to mention having an older brother who teases you ruthlessly and can get on your last nerve.  I also really liked Matt's father, Javier and their relationship.  How Javier understands what Matt is going through and the genuine love and caring that he shows him.

Aside from the family relationships and action, I really liked the Del Toro's Andalusian war horses.  Now, these horses are special because not only can they assist the family in their battle against the skinners, they can also talk.  Which at first thought sounds kind of silly, but these horses really have a personality that stands out.  There's El Cid who's wise, kind but with a wry sense of humor.  Then there's Turk whose arrogant, and well deserves the nickname of Turk the Jerk.  And newcomer Izzy who is also eager to show what she can do.  Together making a wonderful story.

Thanks, Brenda, for reading and reviewing. I had a hoot writing DEL TORO MOON!

I just saw this cover somewhere today and was curious about it. So awesome to then see your review. Sounds like a good read. I don't read many westerns- but I do love horses. :)
~Jess