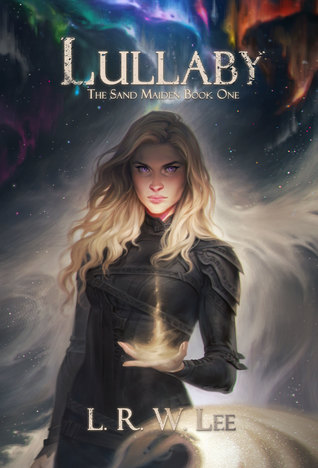 You've heard of the Sand Man. Meet his counterpart, the Sand Maiden.Alissandra thrills to help her human charges make sense of thoughts that need refinement, problems that need solutions, worries that beg for action, and things they should or shouldn’t have said, as she weaves their dreams. She’s been doing it her entire immortal existence. But when the most powerful king in Dream realm sets his sights on her current charge, Prince Kovis Altairn, to exploit him in his quest to conquer Wake realm, Ali has no choice but to flee and pray the sovereign doesn’t hunt her down.Prince Kovis Altairn, crown prince and the most powerful sorcerer in the Altairn Empire, knows nothing about Dream realm, let alone his sand maiden. So when Ali is discovered naked in his bedroom, how will she convince him of her intentions, as well as the danger?

Lullaby is the first in a series of New Adult epic fantasy romances written by L.R.W. Lee, there is mature content so it would be in the 18+ realm for me.  I had the pleasure of reading an early draft, and the subsequent changes that Linda made following reviewer comments, it was really cool to get a glimpse of how the editing changed the beginning of the story.  New adult books aren't something I typically read or review, but Lullaby is special, I was so intrigued by its premise that I knew it was a book that I wanted to read.  Plus,  I've been following Linda for quite some time and really enjoyed her middle-grade series Andy Smithson and knew that Lullaby wouldn't disappoint.

Lullaby consists of a world split into a Dream and Wake realm with both having their own unique magical systems.  In Dream realm,  Alissandra (Ali) is one of many sand people helping the people of Wake to slumber and dream each night, her charge is Prince Kovis, a man whom she cares deeply for.  Ali's father is the ruler of Dream and is bent on controlling the people of  Wake,  through the use of "mares" he can enter a person's mind and take control.  Once Ali and her sister figure out his plans,  Ali is left with no other choice but to escape to Wake to get away from her abusive father and protect Kovis.  In the early draft, the first chapter was a bit confusing, but as I kept reading, I felt it was meant to be this way because Ali is in a new place with magic that she doesn't understand and a human form that is new to her.  Not to mention she is in Prince Kovis' bedchamber surrounded by his guards.  The changes Lee made firmed things up, pique your curiosity and made me want to know more about this world and characters.

Lee creates a magical system where the people of Wake can wield the elements of fire, ice, metal, and wind, powers that don't exist on Dream.   Yet, Ali is also unique because not only can she put someone to sleep, she has also developed the ability to wield elements in very unpredictable ways.  They're skills that she never had before but also are an equal match to those of the Prince.  Kovis is both intrigued by Ali's story and her ability to help him sleep that he takes it upon himself to train her and see exactly what other powers she can control.  Lullaby is a fresh world with lovely romantic moments and the kind of fantasy elements I enjoy reading.   Not only does Ali begin training for an epic magic competition pitting her against some of the top sorcerers of Wake, there are mysteries to uncover in Kovis and his siblings past, and Ali's father and the "mares" bring just the right amount of tension to the story.  I also really enjoyed the magical bond Ali and Kovis share which allowed them to telepathically communicate with one another, their playful humor and the eventual romance that ensued between the two was a delight.  While things ended on a slight cliffhanger, I'll definitely be waiting for the sequel.
Posted by Brenda at 11:22 AM