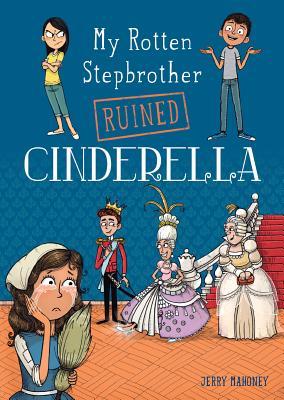 Opening Line:  " Maddie McMatthews was pretty sure she had the worst stepbrother in the entire world."

Eleven-year-old Maddie can't wait to share her favorite story and a diorama she made of Cinderella's wedding with her class at school.  That is until her rotten stepbrother Holden ruins everything by poking holes in the story with all his questions, and right in front of the whole class.  It's almost as embarrassing as that time he posted a picture of what her hair looks like in the morning online.   Even though Holden asked some good questions like "what would happen if the glass slipper fits another woman beside Cinderella? " he didn't have to ruin her presentation.  That night, Holden and Maddie also discover Maddie's diorama and an ebook of Cinderella on Holden's tablet have changed, Cinderella's stepsister is now the one marrying the prince and Cinderella's stuck scrubbing the floors.  Maddie grabs her copy of the book to see whether all of the stories have changed and as she reads aloud the line "Once upon a time..." they're magically transported into the pages of the story.  It's up to them to fix what was broken.

I've always been a huge fan of fairytale retellings and the title of this series, My Rotten Stepbrother Ruined...  has such a catching ring it really piqued my interest.  Like Maddie, Cinderella is one of my favorite fairytales, and I must say I really enjoyed Mahoney's spin on Cinderella.  Cinderella continues to be as kind and patient as I remember, with a sense of grace and poise, but now Maddie's transformed into one of Cinderella's wicked stepsisters, Holden's a foot soldier and Prince Andrew has prosopagnosia (aka difficulty recognizing faces), which amused me to no end.  What a mixup they've created.  Equipped with only Holden's tablet they take on their new roles as characters from the story and try to get the prince and Cinderella back together again so they can have their happily ever after.   But when Cinderella is locked in the dungeon, getting these two together becomes a bit more difficult.  I liked that Holden and Maddie act and think like eleven-year-olds, they bicker and disagree as stepsiblings might, but they're also so darn funny.   While Holden points out the flaws in the original fairytale, he also realizes that he needs to work with Maddie to fix things or be stuck as a foot soldier.  We all knew that Cinderella's stepmother was wicked, but now even she wants to marry the prince.  My favorite change though is when the stepsister due to marry Prince Andrew isn't happy about marrying him after all, she'd rather be designing wedding dresses than wearing them.    Such an amusing story, and makes for a wonderful comparative/contrast teaching tool for discussing plot and the messaging in the original fairytales.  Here are the covers for the other three titles in the series.

"My whole life, she's told me I'm not worthy of marrying a prince."  (Cinderella)

and Darreth's response:   "You have your own eyes, don't you?  So why use hers?  The question is, how do you see you, Cinderella?"

It sounds like a fun twist on the old story. Thanks for sharing this series. I’ll have to look for these books.

I agree with you that this is an intriguing title. Glad you enjoyed this retelling so much.

This sounds like a really fun series. I love fairy tale retellings and twists on them. I will have to check these out. Thanks for sharing!
~Jess

Wow! Sounds like a fun series. Thanks for introducing!

I enjoy retellings with some new premise thrown in. Thanks for sharing, I'll check these out.