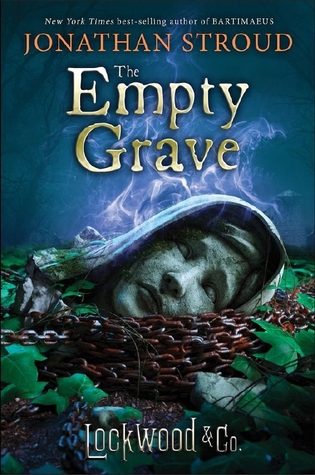 The Empty Grave (Lockwood & Co., #5) by Jonathan Stroud
Publisher: Disney HyperionFormat:  Hardcover
Number of Pages: 437
Published:  September 12th,  2017
Source: Purchased
Why I wanted to read this:  Stroud has been one of my favorite authors ever since reading The Amulet of Samarkand and meeting the character of Bartimaeus.

Opening Lines:  "Want to hear a ghost story?  That's good,  I know a few.  How about the one of the sightless blue face, pressed against the cellar window?  Or the apparition of the blind man holding a cane made of children's bones?"

So, I ventured into my last book in the series, a little uneasy with what to expect for the characters that I've loved reading, and despite a huge part of me wanting to race through the book to see if any of my predictions would come true,  I'm happy that I instead read it really slowly savoring every word.

The Empty Grave begins with Lockwood & Company breaking into the Fittes Mausoleum, trying to prove or disprove revelations Skull made at the end of The Creeping Shadow, or whether or not Marissa Fittes remains really are within the tomb.  Meanwhile, Penelope Fittes has been building up the Fittes Agency by absorbing all of the smaller agencies,  changing rules and closely monitoring Lockwood and Company in hopes of catching them doing something wrong.  George continues researching their various cases and is instrumental in identifying a revenant they encountered in the mausoleum.   The gang also takes on a particularly dangerous mission to remove an evil spirit at the Tufnell Theater putting everyone in danger.  There's an unsettling trip to the graveyard, an eerie message for Lucy from a mechanical fortune teller machine and many, many precarious situations for our ghosthunters.   Not to mention, they begin to have suspicions regarding the real source of the Problem that has been causing all of the ghosts in London, and it ain't pretty.

Stroud has once again given me a book filled with suspense, the witty bantering of Skull and Lucy, a spooky atmosphere, creepy, eerie ghosts, the thrilling action, and this nerve-wracking feeling of impending doom that I couldn't seem to shake.  It was so engrossing that I  put everything else on hold just to read.  Only stopping for a brief moment over a particular scene that gave me goosebumps.  So many of the questions that I previously had were answered, albeit I was a tad disappointed by a few things that I would've loved more clarity on, or even had resolved completely regarding my beloved Skull, but at least there were touching moments between Skull and Lucy, Lucy and Lockwood and I'm very delighted with the way the story geared everything toward one final amazing battle.

"Say I let you out.  What would you do?"  "I'd flit about.  Stretch my plasm.  Might strangle Cubbins.  Carry out a spot of casual ghost-touch, now and again.  Just simple hobbies.  It would be a darn sight more enjoyable than sitting here."  I grinned at it.  "You make your case so well..."

Just love how he's all nonchalant about killing poor George.  And this one when Lucy confides in Skull about her concerns for Lockwood

How Skull is all insincere with his concern for Lockwood, and then other times almost jealous, even the scene where he's kinda psychoanalyzing Lockwood to help Lucy understand why Lockwood's elusive.   Such amazing wonderful characters that I worried over,  watched grow and become closer across the series and who I really would've loved having cake and tea with.   This will be a series that I will continue to revisit and hold out hope that Stroud will one day return to writing books set in this world.   I'd even love something entirely different as long as there's a sassy character like Bartimaeus or Skull.  Until then, I'm thrilled by the news that the Lockwood and Company series is being adapted for television!
Posted by Brenda at 12:49 PM