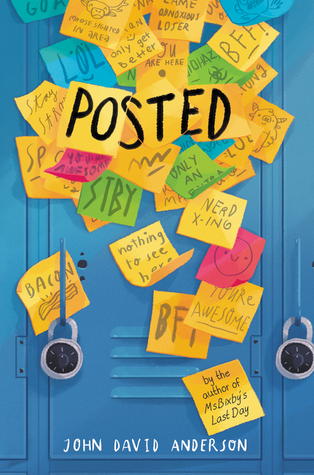 Posted by John David Anderson
Publisher: Walden Pond PressFormat:  Hardcover
Number of Pages: 384
Published:  May 2nd, 2017
Source: Purchased
Why I wanted to read this:   From the author of two of my favorite books, Ms. Bixby's Last Day & The Dungeoneers.

Opening line:  "I push my way through the buzzing mob and freeze.  Heart-struck, dizzy.  It takes me a minute to really get what I'm looking at.  Notes.  At least a hundred of them.  Pressed all over the freshly painted locker. "

Frost in the main storyteller of Posted, acquiring his nickname from winning a poetry contest, his love of Robert Frost and the poems he writes and hides under his bed.   Frost and Wolf have the most in common, both their parents are having difficulties, Frost's being newly divorced and Wolf's arguing all the time.  Wolf is also the musician of the group, winning several piano competitions.  Bench's nickname comes from sitting on the bench during school sporting events and DeeDee is the dungeon master for their Dungeon and Dragons games. Together they make a "tribe" or "perfect square" during lunch.  Until a new girl, Rose comes along and disrupts their seamlessly happy little group.   Rose just happens to be there at the beginning of all of their problems, but she isn't the cause of them.  She was just the new girl looking for a friendly place to sit during lunch one day.  The schoolwide ban on cell phones and the resulting post-it war probably had a lot to do with the events that unfolded, but things between the four boys probably would've changed anyways, with or without Rose.  It's these boys interactions that wonderfully illustrate one of the books main themes, that friendships ebb, grow and change during middle school.  That being liked, accepted and making your way through middle school can be tough.  Anderson also tackles the topic of bullying through the post-it war.  Initially, starting it off as a way to get around the cell phone ban and then snowballing into the targeting of one of their own.   There are the nudgings in the hall, verbal teasing, escalating to threats.  Frost, Wolf, DeeDee and Rose each deal with the situation in different ways.  I personally really liked the way that Rose handled herself, she embraced the hurtful name "Moose" that other students were trying to tease her with and used it as her character name during a D&D game.  She's also an extremely loyal friend, and I would've loved spending my lunches with her growing up.   Posted also questioned why we give people labels and how damaging that words can be.  Important, relevant topics that can lead to some wonderful class discussions.  I adored this almost as much as Ms. Bixby's Last Day.

My favorite quote from the book:  "Words are ghosts that can haunt us forever."

"Words can be beautiful. They can make you feel things you've never felt before. Gather enough of them and they can stick those same pieces back together, provided they're the right words said at the right time."