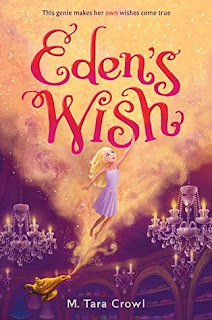 All twelve years of Eden's life have been spent in an antique oil lamp. She lives like a princess inside her tiny, luxurious home; but to Eden, the lamp is nothing but a prison. She hates being a genie. All she wants, more than anything, is freedom. When Eden finds a gateway to Earth within the lamp, she takes her chance and enters the world she loves. And this time, she won't be sent back after three wishes. Posing as the new kid at a California middle school, Eden revels in all of Earth's pleasures--but quickly learns that this world isn't as perfect as she always thought it was. Eden soon finds herself in the middle of a centuries-old conflict between powerful immortals. A ruthless organization run by a former genie will stop at nothing to acquire the lamp and its power--even hurt Tyler and Sasha, the new mortal friends who have given Eden a home. To save her friends and protect the lamp's magic, Eden must decide once and for all where she belongs. 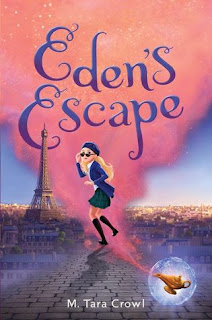 Eden's new life on earth begins in New York City under the guidance of her new guardian: Pepper, a petite, bubbly genie alum who's also a Broadway actress. Before she has a chance to settle in, though, Eden is whisked away for a granting--only to find herself trapped in a laboratory. David Brightly, owner of the world's leading tech company, cares more about tapping into the lamp's power than making a wish and starts performing tests on Eden. With Brightly's plasma shield around the lamp, Eden has no way home. Left without a choice, she escapes the lab and goes on the run. After her daring exit, Eden finds herself on the streets of Paris--home to Electra's headquarters. Left in a strange city with a price on her head (courtesy of scheming Brightly), Eden has to keep her wits about her. She dons a chic disguise and flits around Paris incognito, investigating Brightly Tech. Assisted by Pepper and her old adversary Bola, as well as some new friends, Eden embarks on a quest to retrieve the lamp and protect the secrets of the genie legacy.

Today I’m very excited to be participating in an interview and giveaway for Eden's Escape, the sequel to Eden's Wish by M. Tara Crowl

Can you tell my readers a little bit about your first book, Eden's Wish and its sequel Eden's Escape.

Eden’s Wish was released by Disney-Hyperion in September 2015. It’s a middle-grade novel about a 12-year-old genie named Eden who escapes her lamp and tries to pose as a regular girl on Earth. Of course, she isn’t successful. While she’s in the midst of trying to make friends and fit in at school, she finds herself in the middle of a battle between dissenting groups of genie alumni who live on Earth.

Eden’s Escape is the second book in the series, and it came out this September. Eden now finds herself in New York City with a genie alum named Pepper who becomes her new guardian. Just as she’s getting comfortable, she’s whisked away for a granting that goes very wrong. She escapes the wisher, realizes she’s in Paris, and goes on the run. It’s the start of a whole new adventure.

I like how your story blends fantasy with real world settings like New York and Paris, was there any research that you needed to do?

Thank you! Yes, I did research by spending time there. I live in New York, so that part was easy—I just hopped on a subway if I wanted to check out a different part of town. I also spent some time in Paris. I went to Europe solo a few years ago and fell in love with Paris. It was right when the book was going out to publishers. I decided that if it sold, I wanted to write a sequel set there. To my surprise and amazement, it happened! So the following year, I went back to Paris for a few weeks to research and write.

Were there any particular MG books that have inspired you? Or a favorite book that you’re reading now?

Lots of them! A Wrinkle in Time has always been hugely inspirational for me. I read it for the first time in first grade when my teacher gave it to me, and a hundred times since then. I love all of Roald Dahl’s books. They’re so whimsical and unique, with a touch of darkness. Another one that made a massive impact on me is The Mennyms by Sylvia Waugh.

What is it about writing for a middle-grade audience that you enjoy the most?


Middle-grade readers are curious and intelligent, but they also still have innocence. They’re eager to learn, explore, and imagine..

Were there any differences in your writing process when writing the sequel to Eden's Wish?

Yes, it was very different. I started Eden’s Wish when I moved to Sydney, Australia for grad school—the first section of it was my thesis. Then, after that year in Sydney, I moved to New York and finished writing it. It was a long process because I was working lots of part-time and temporary jobs in the meantime, trying to support myself while I was pursuing my dream. And it was a dream. I hoped that people would read my book one day, but I couldn’t conceive of what that would actually be like.

Then, to my delight, Eden’s Wish sold to Disney-Hyperion as part of a two-book deal. That meant that I wrote Eden’s Escape under contract, and that was an entirely different experience. Since it was the second book in the series, I went in knowing the characters, the world, and the tone. That made it easier to write. But also, writing a book that I knew was going to be published raised the stakes. I wanted to make sure my characters were consistent, but also growing. And I wanted the story to be more thrilling, more engaging, and more meaningful all at the same time.


What was your favorite part of writing Eden's Escape?  Do you have a favorite scene or line from your novel that you would like to share?

I loved writing about Eden’s relationship with her new guardian, Pepper. Pepper is a vibrant, bubbly genie alum who lives on Earth. Through the course of her immortal life, she’s done a number of stints as a theater actress. She explains it to Eden in Chapter Three:

“In 1660, I was the first woman to act onstage in England. I was Margaret Hughes, playing Desdemona in Othello. What a night that was!” For a moment, Pepper seemed to have drifted right back there.

“Margaret Hughes?” Eden prompted.
“That was the name I used for those first twenty years—my first career. In a job where people see you onstage every night, that’s about the longest you can get away with before they start talking about why you never age.” She rubbed her nose.
Eden had never thought much about the logistics of immortality on Earth. Perhaps, like most things, it wasn’t as simple as it seemed.
“So what then?”
“Then I changed my name to Emily Bankman. I moved between tiny towns in England, working as a governess and cleaning houses. When I could save up enough for it, I’d put on a big hat and a scarf to hide my face, and steal away to London to see a show.” She clasped a hand over her chest. “It broke my heart to be away from the theater. But I knew that eventually my time would come again.”
“And did it?”
“Fifty years later. I moved back to London as Emily, and did it all over again.”
“Didn’t people remember you?”
“No. I’d been away for fifty years, remember. I generally do fifteen to twenty years of work, then fifty years waiting to work again. The way I see it, I have to keep a cycle of approximately seventy years—a pretty average life span for a mortal. Mortals rarely pay attention to their parents’ icons. If I happen to look like another generation’s star, no one’s the wiser.”
“And that works?”
“So far, so good.” Pepper shrugged. She picked a piece of pepperoni off a pizza slice. “Of course, nowadays it’s tougher, with the Internet. I’ve got to be more careful this time around.”
What are you working on now?

Something completely different that I’m really excited about. Stay tuned!

"Crowl's imaginative storyline rings with both perception and humor."

"Middle grade readers will enjoy the children's autonomy and Eden's humorous difficulties in grasping how school works...Hand this to readers who like their magical fantasy combined with middle school drama."

"An imaginative romp with a smart, snarky protagonist and a humorous interpretation of the world as we know it...[Eden] is also just plain entertaining, with a sassy attitude and a clever wit that saves her on more than one occasion."
―BCCB 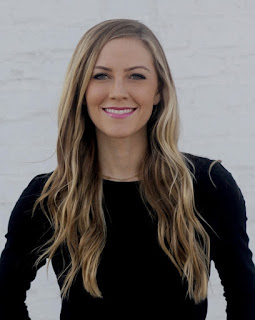 M. Tara Crowl grew up in Murfreesboro, Tennessee.
She studied Cinematic Arts at the University of Southern California, then received an MA in Creative Writing at Macquarie University in Sydney, Australia. She lives in New York City.

Tara has generously offered one (1) signed copy of Eden's Escape for a giveaway.  Giveaway open to US and Canadian mailing addresses only.   To enter, all you need to do is leave a comment on this post by noon (PST) on Monday, October 31st  (with some way for me to get a hold of you).  I'll announce the winner on November 1st and the author will mail you Eden's Escape.