BOOK TRAILER REVEAL + GIVEAWAY FOR JOSHUA AND THE ARROW REALM! 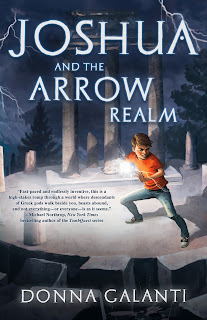 Joshua And The Arrow Realm:  On August 30th take the lightning road back to a world of beasts, bandits, and heroes in book two of the Lightning Road series. Join Joshua in a new fight for power in the Arrow Realm. Can Joshua and his friends conquer an unstoppable evil? Joshua never thought he’d return to the world of Nostos but is soon called to the Arrow Realm to free his imprisoned friend, King Apollo, kidnapped as a power pawn in Queen Artemis’s quest to conquer every realm. With his loyalties divided between our world and theirs, Joshua wonders whether he alone can restore magic to the twelve powerless Olympian heirs and save all those enslaved. But when he finds himself abandoned in his quest, he fears he cannot only save those imprisoned—but himself as well.


“Fast-paced and endlessly inventive, Joshua and the Arrow Realm is a high-stakes romp through a wild world where descendants of the Greek gods walk beside you, beasts abound, and not everything—or everyone—is as it seems.”  ~ Michael Northrop, New York Times bestselling author of the TombQuest series

The Midwest Book Review calls book one, JOSHUA AND THE LIGHTNING ROAD, “a heart-pounding thrill ride full of unexpected twists and turns from start to finish.”

Grab book one for just $.99cents now through September 20th.

Also,  be sure to enter the fun giveaway package at the bottom of this post that includes a paperback of book one, poster of the Lost Realm, bookmarks, and a $25 B&N gift card (U.S. only). Sign up for Donna’s Thunderclap book release campaign and help her zap the world through social media with her lightning message!


Excerpt from  JOSHUA AND THE ARROW REALM:

A faint rumble groaned through the whistling wind.

Charlie reached the frozen pond, spinning across it. “Woohoo! I win! You Americans can’t beat us at speed!”

Lightning flashed. It zinged across the pine trees like brilliant sunlight. A seed of terror flickered inside me.

Another flash scorched the sky.

Charlie’s smile fell to a frown as he raced across the ice, peering up into the swirling clouds.

We both knew what lightning could do.

Suddenly, sneaking outside for a moonlit sled ride before Bo Chez got home from his monthly poker game didn’t seem so smart.

The sleet turned to snow. Icicles flew off trees like glass splinters, shattering on the hard snow. As I shot toward the pond, a tree on the edge moved. Its branches swayed in the swirling snow.

It wasn’t a tree, but a girl! She stumbled through the mad flurry, arms outstretched.

Gusts snatched the words away as my sled hit the ice and careened out of control on the bumpy surface. The girl staggered and fell onto the pond. I twisted my sled away to avoid hitting her and smashed right into Charlie. With a yelp, he pulled me up, and we clumped toward the girl. We lifted her up, half dragging her back up the hill to the house in the pelting snow and sleet.

“Who is she?” Charlie yelled.

He said more, but his words were lost in the wind.

My lungs burned with the cold and effort. There was only one reason someone would appear with lightning—to steal us. This girl might appear like a waif unprepared for a storm but I couldn’t trust that’s all she was. 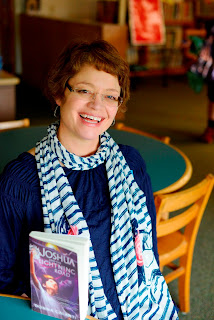 Donna Galanti is the author of The Element Trilogy (Imajin Books) and The Lightning Road series (Month9Books). She attended an English school housed in a magical castle, where her wild imagination was held back only by her itchy uniform (bowler hat and tie included!). There she fell in love with the worlds of C.S. Lewis and Roald Dahl, and wrote her first fantasy about Dodo birds, wizards, and a flying ship. She’s lived in other exotic locations, including Hawaii where she served as a U.S. Navy photographer. She lives with her family and two crazy cats in an old farmhouse, and dreams of returning one day to a castle. Donna is a contributing editor for International Thriller Writers the Big Thrill magazine and blogs with other middle grade authors at Project Middle Grade Mayhem. You can find her at www.donnagalanti.com.

Preorder your copy of Joshua And The Arrow Realm at:
*   Amazon *   Barnes & Noble *

BOOK REVIEWERS: E-book ARCs are available for this next thrilling book in The Lightning Road series! Email donna(at)donnagalanti.com for copies and specify the format you’d like.

Congrats to Donna on her new book!

Thanks so much for hosting the Joshua and the Arrow Realm book trailer!! I love being on here today! :)

So excited to see Donna's latest book here today. I love her writing! I would love to win the giveaway to share the book with my co-author, Stephanie's, school. :) Thanks for sharing!
~Jess

Good luck Jess in winning! Thanks for being such a great support!