Review of Amari and the Great Game by B.B. Alston 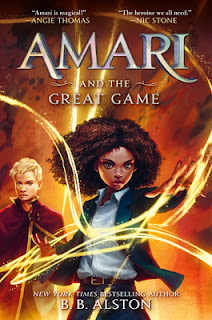 Opening Line:  "I sprint down the sidewalk, flying past designer boutiques, luxury shops, and a fancy art gallery."

Amari and the Great Game is the sequel to the fabulous Amari and the Night Brothers which released in 2021.  It was an instant success, spending more than 30 weeks on the New York Times bestseller list.  In the first book, Amari was instrumental in finding her brother Quinton, who remains under a curse, and saved the Bureau from Dylan Van Helsing, who was later imprisoned in the Sightless Depths for his crimes.  In the newest book, Amari is set to return with her friends to the Whitman Preparatory Academy and the Bureau of Supernatural Affairs as Junior Agents.  That is until she receives an ominous message, "beware of unseen dangers" in her fortune cookie, setting off a series of mysterious events.  First, a wild storm appears out of nowhere and Amari then witnesses a temporary time freeze, which affects everyone on the city bus but her.  Word is also received that Merlin, the current Prime Minister, and the entire Supernatural World Congress have been permanently frozen in time.  Using this news to his advantage, the Deputy Prime Minister, Bane uninvites Amari to summer camp and has her Othernet turned off, leaving her no way to check on her brother's recovery from his curse.  With Bane having established his control, he also sets out to rid the society of all magicians and what he calls Unwanteds.  But given Amari's new notoriety for having saved the Bureau, he is forced to reinstate her in the summer session and Amari returns to the Bureau.  Along the way, Amari was joined by Maria Van Helsing, Elsie and Jayden.  Lara Van Helsing also helps their investigation but only after Amari agrees to trust her.  Her trust issues are very understandable given how much Lara tortured and bullied Amari in the first book.  I loved that when Amari was faced with the decision of treating Lara how she was treated, she instead chooses to befriend her.

Then news arrives that Dylan has escaped his prison and Amari suspects he caused the time freeze.  Just as she begins an investigation, an offer also arrives from the League of Magicians for Amari to take control of the league.  At first, she declines, but then Amari is pitted against Dylan in a series of challenges, "The Great Game."  The winner will have control over both the power and the magic of the loser and lead all the magicians.  The challenges were some of my favorite parts of the book.  Partly because Amari was sworn to secrecy and had to figure out how to tell Elise without revealing why she couldn't tell her.  Also, each of the challenges were exciting often placing her in grave danger and I was really vested in finding out if she could win and gain the control to save her brother, clear the magicians name, and finally release Merlin from his frozen state.

As a whole, I love this series.  The world is so well developed and has strong Harry Potter vibes with a nice mix of Artemis Fowl/Men in Black, as described on Goodreads.  Head Minister Bane and Harlowe are perfect new villains with their secrets and intrigue.  The plot moved very rapidly and there are some great friendships here.  I also loved the magical setting, the exploring of different departments and the way that Amari is coming into her power.  The pitting of fair versus foul magick.  That ending though, oh my.  This is the second book I've read recently where the ending completely shocked me and has me so eagerly awaiting a sequel.  Seriously, when does it come out?  I want to be on that list ASAP.    I highly recommend beginning with Amari and the Night Brothers to provide context for Amari's confrontations and challenges and well just because both of these books are amazing.  **A huge thank you to Spark Point Studios for the hardcover in exchange for an honest review**

I have this book on hold at the library. You've gotten me very excited to pick it up. Thanks!

This series sounds like so much fun! I need to check it out for sure.

This book has been on my list for a while and thanks to your rave review, I will be moving it up the list! I really enjoyed the first book last year. Thanks for reminding me to grab a copy of this one!

I really liked the first book when I read it last year, so thanks for reminding my about the sequel. I've now reserved it in the library!

I'm picking this book up at the library today to read on my vacation next week. You've gotten me super excited to read it.