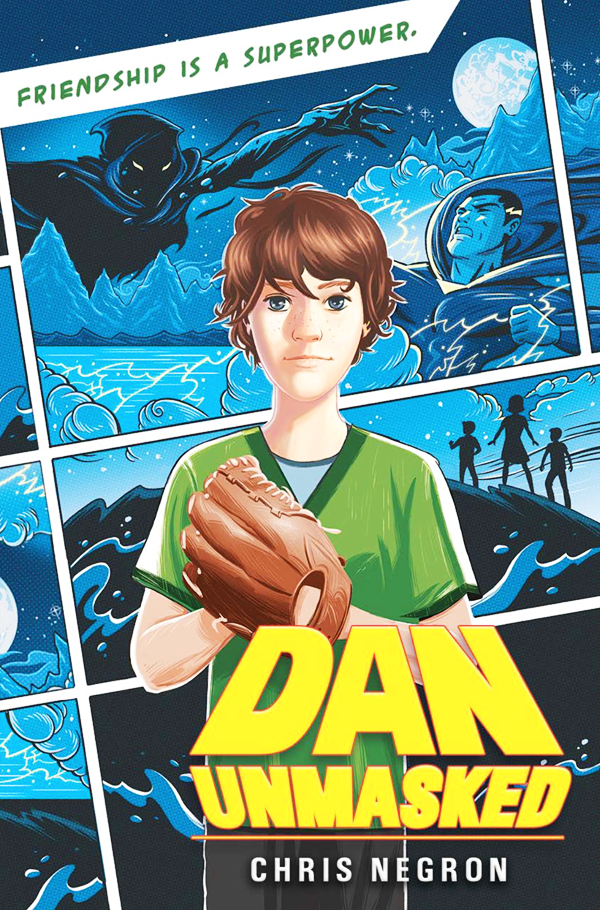 Opening Line:  "I almost miss it."

Dan and Nate are best friends, they both love baseball, George Sanderson's Captain Nexus comic books, and superheroes.  They even host special release day readings with their baseball team in Nate's basement when each new comic book comes out.  Then one day during practice,  while Nate and Dan are talking, Nate is struck in the head by a baseball.  Nate is seriously injured and is placed into a medically induced coma so that the swelling on his brain can be controlled.  The prognosis is bleak and dependent on whether he regains consciousness once the sedation is removed.  Dan blames himself for his friend's injury but is determined to find a way to help Nate.

Courtney is Dan's younger brother, Ollie's new friend.  She's just started to hang out at the release day readings and hasn't learned all of the rules yet but after Nate's injury, she tries to rally Dan and Ollie into working on a comic book project.  She observes how they need each other at this time and pressures them to work together.  Ollie will do the illustrations, Courtney will develop the story and Dan will add the lettering.  Dan sees the project as a way to help Nate find his way back home by putting Nate into the story as a superhero inspired by the Captain Nexus comic books.  They hope to finish the comic for Nate's birthday, and in time to enter a Fan Art competition hosted by Captain Nexus with the grand prize of meeting George Sanderson.  After their entry wins, the group tries to get advice from Mr. Sanderson on how to help Nate return home, but Mr. Sanderson has his own past traumatic event to overcome before he can be any help to Dan and his friends.  Maybe together they can find the answer.

I wasn't into superheroes growing up, only occasionally read comic books, and played softball just that one summer for the YMCA, but Dan Unmasked sounded like such a unique book and so I was excited to be able to read it.  Plus a bonus, that cover is gorgeous.  There are a lot of pieces to this story and I really liked how Negron blended the comic books with baseball, two things that instantly grab at your attention.  I did feel quite sorry for Dan when Nate is injured, he takes all the blame on himself.  He's convinced that his friend is somehow stuck in an alternative world after entering this sort of portal (the Nexus from his favorite comic book) and he needs to help him find his way back home.  Dan's continuously searching for answers, be it getting in contact with George Sanderson to discuss the Nexus to developing his own comic book with Ollie and Courtney.  Then Dan learns about Familiar Auditory Sensory Training or (FAST) a neurorehabilitation approach that uses stories told by those familiar to Nate as auditory stimulations and Dan is again convinced that this will be the answer to reaching his friend.  I was surprised though that Dan didn't spend more time telling his friend stories throughout rather than waiting until the very end of the book, but it's really a small quibble.  Given my background in speech pathology and TBI, I think it boils down to that I was looking at the medical pieces of a TBI, the coma stimulation, physical and occupational therapies, and the story was more about the emotional and friendship aspects, Dan searching for answers, the comic book, Dan's relationship with his mom and father and even the upcoming championship game to name a few.  How those things changed while Nate was in the hospital and how Dan felt about his role in Nate being injured.  There's even the side story of George Sanderson which reminded me of James O' Barr writing the Crow to deal with his own personal tragedy.  This is Negron's debut novel and it's a very strong one, I've seen it compared to John David Anderson's work and totally can see this.  I'm looking forward to seeing what he writes next.

** A huge thank you to Blue Slip Media and Harper Collins for the ARC **
Posted by Brenda at 2:07 PM