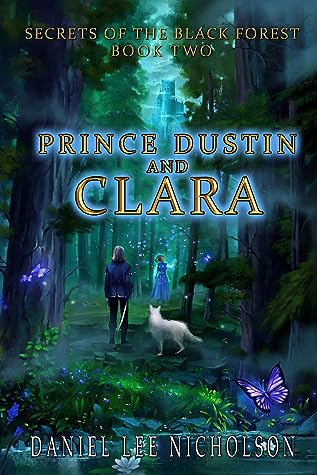 Opening Line: "On a splendid spring day many, many years ago, the remaining snow on the mountain tops finally melted."
Secrets of the Black Forest takes place several months after the events in the first book.  The winter snow has now given way to spring.   Prince Dustin and Princess Sugar Plum have been searching for their parents, who vanished some time ago.  Despite an exhaustive search within the Black Forest, they've come up empty-handed.  Prince Dustin is now due to be crowned as the King of Konfetenburg and just as the coronation is about to begin,  Princess Sugar Plum goes missing.  King Egon, the Mouse King, has kidnapped the princess and is threatening to harm her unless Prince Dustin brings Clara to Niedertrachtig Castle within three days.  To save princess Sugar Plum, Clara and Prince Dustin must venture into the deepest darkest parts of the Black Forest.  A trip that is sure to be filled with many perils and one that will test the adventurer's bravery and courage.

According to its website, Fossil Mountain Publishing has a mission to publish books that include both the performing and fine arts.   Each story is divided into acts, with the inspiration for the first book in the series being The Nutcracker.  Book one, Deep in the Black Forest, according to the notes at the end of the book is a retelling of the Nutcracker fairy tale with a re-imagining of the snow scene.  I do so enjoy the Nutcracker and even though I haven't been to the ballet for quite some time, I do love to listen to the music each year.  I would've probably enjoyed reading the first book but it isn't really necessary to have read it first to follow the current storyline.   Book two, Secrets of the Black Forest includes many of the same characters from the ballet such as Clara, Herr Drosselmeyer, the Sugar Plum Fairy, and the Mouse King, it has the feel of a quest or an adventure.  The interior artwork by Luke Ahearn is gorgeous, it's framed and captioned in such a way as to give the appearance that it could be a piece of art hanging in a gallery.

Secrets of the Black Forest makes me feel nostalgic for my time having lived in Germany.  It's always a treat to find a book that includes German words and names with fantasy elements from the Nutcracker.   I also quite enjoyed reading the many descriptive passages by Nicholson.  For example this one:

"The sun glowed in soft shades of amber.  Clara was making her bed and fluffing the over-stuffed pillows.  Her bedroom was decorated in ballet pink with white lace accents on the bed skirt and curtains.  A warm breeze from the open window gently blew the curtains in rhythm.  The smell of primroses scented the air."

It's lovely how the words that an author uses in their passages can conjure up a scene or setting.    Secrets of the Black Forest can definitely be read as a standalone, and if you really enjoy the Nutcracker Ballet I'd encourage you to read the first book, Deep in the Black Forest as well.  Nicholson appears to bring his past experiences performing as solider in the Nutcracker into the storyline and I imagine the first book wonderfully details the snow scene from the ballet.

The prologue of Secrets of the Black Forest alludes toward something bad or ominous about to happen.  Herr Drosselmeyer and Queen Nordika, the Snow Queen are concerned with visions of upcoming danger.  In the beginning chapters, The Mouse King, Egon has kidnapped the Sugar Plum Fairy and a valiant rescue team was assembled.  Following their departure, the action begins to take off.  I really like that Nicholson set the story in the Black Forest of Germany.  I'm picturing densely wooded areas, mountain ranges and the site of many of Grimm's fairytales.    As Prince Dustin and Clara make their way through the Black Forest, they encounter many magical creatures.  Some kind of silly, like the Knuddeligs , a baby bear-like creature who seems to want to snuggle.  And others that are helpful like the Schmetterling or butterflies.   Yet, the Black Forest maintains its image as a dark place, a place that is best not to venture into.  When the group encounters the Lovely Ladies of Tanzer Lake Island, I never thought they would be able to escape.  So definitely a story filled with action and adventuring.  I'm curious if there are plans for another story in the series and hope to read the first book in the future.