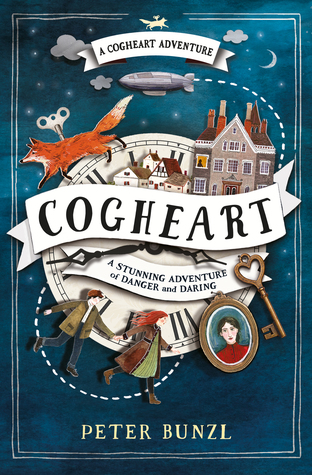 Opening Line:  "Malkin pressed his forepaws against the flight deck window and peered out."

Cogheart is a steampunk middle-grade fantasy adventure set in Victorian times that includes flying airships or "zeps", clockwork pieces that include cogs, wheels, keys and mechanical animals and humans, there are even hybrids of humans and mechanicals.    I've only read a few steampunk books,  A Perilous Journey of Danger and Mayhem by Christoper Healy, The Peculiar by Stefan Bachmann and  The Fog Diver by Joel N. Ross are the first ones to come to mind, but I'm always fascinated to read more and the cover of Cogheart really piqued my interest.  Plus I'm always up for an "adventure story of danger and daring."   Isn't that cover gorgeous though?  Each chapter heading also includes one of these lovely illustrations.

The book starts out with a suspenseful prologue aboard The Dragonfly, an airship manned by Professor John Hartman which has just come under attack from a silver war airship.  Seeing no means of escaping, the professor sends his mechanimal Malkin (a pet mechanical fox) on a mission to bring an envelope to his daughter Lily.  As Malkin tries to locate Lily, he is pursued by men in stovepipe hats with silver mirrored lenses.  So yep, lots of danger as he tries to flee their capture and bring his letter to Lily.

From there the pacing slows down a bit as other characters are introduced, their motivations come into question and we learn more about Lily's father, Professor Hartman's mechanical inventions.  As the events in the prologue were happening, Lily was safely tucked away at Miss Octavia Scrimshaw's Finishing Academy for Young Ladies taking lessons in deportment.  Lily tries to be a good student, but it's evident she has no desire to become a proper lady.  One thing I really liked about Lily was her passion for reading her penny dreadful stories about detectives or pirates, and her desire to have an adventure of her own.   Then Madame Verdigris, the families housekeeper arrives bringing news of her father's ships crash, his disappearance, and that she has been appointed Lily's guardian and will be taking her back to the family home in  Brackenbridge.  Once at home,  Lily begins to have suspicions about Madame Verdigris, especially when mysterious men start lurking around town and the manner in which Madame Verdigris is snooping around the house.  Before too long,  Lily is reunited with Malkin and from her father's letter learns that he had been working on a special invention, something that could revolutionize the mechanical world.   An invention that her father wants her to keep hidden and safe.  With the help of the clockmaker's son and her beloved mechanimal Malkin, Lily makes plans to do just that.

I quite enjoyed Cogheart.  The story brings up some interesting questions about souls and whether in this case, mechanicals have a soul?  The "mechs" in the story followed a set of rules where they can't hurt humans but can be hurt by them.  So part of the premise included the idea that because some characters believed that mechs don't have a soul or feelings, they can easily be dismissed, replaced, or were expendable.  But Lily saw the mechs as an extension of her family, that they should be protected and treated with respect and dignity.   I really enjoyed Lily's determination and convictions and felt she complemented well with Robert who was not only afraid of heights but less self-assured,  timid, even hesitant about his goals in life.  Together they were brave, loyal and helped each other overcome their fears.  And who couldn't love a mechanical fox, who despite being slightly over-opinionated, curls at your feet and is always eager to protect you when you're in danger.  I'm really looking forward to reading Moonlocket when it releases in the Fall, which is slated to be "a thrilling tale of catastrophe and courage."

Favorite Line when Robert is talking to Lily about repairing a music box with his father and it goes all wrong, and his father tells him to

" ...think of it like life:  It looks complicated when you see all the separate pieces, but the purpose of the music box is to play joyful music.  You just have to remember how to fit them together so it will.  The same with life really.  It's just about the living of it.  That's all you have, and all you can do:  live and be happy."  (pg. 354)
Posted by Brenda at 11:58 AM