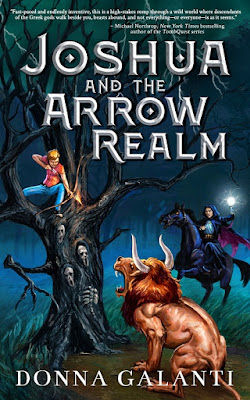 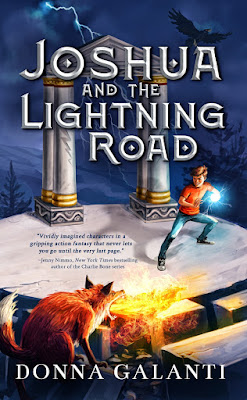 Harnessing the Power of Lightning with Imagination by Donna Galanti

Storms have always fascinated me, and I vividly remember being nine years old when my intrigue with lightning began. We lived in rural New Hampshire at the time where the sky was vast and covered me in darkness. I felt so small in the world under that giant black sky – until it lit up with white fire power and sucked me into its energy.

I would sleep out on the screened-in porch to watch the big show, intoxicated by the smell of rain and electricity in the air – and I’ve never forgotten that smell. Smells can hold powerful memory triggers, and I wanted readers to see Joshua’s world as he experiences it with all his senses in Joshua and the Lightning Road. When you first smell a new scent, you link it to a person or event, right? Like how the scent of fresh cut grass can remind you of a summer day, even if it’s the end of autumn. And when you happen upon that smell again, the link is there, ready to pop that memory open.

When I got older the movie War of the Worlds fascinated (and terrified me!) with how the aliens rode blasts of lightning. I thought “wouldn’t it be cool to travel a lightning road to another place?” And the idea for Joshua and the Lightning Road was born.
I imagined a road of lightning that didn’t burn you but a road you could surf on to another world – a road that connected worlds. In the book, Joshua calls the Lightning Road a ribbon of cold fire, and in this scene, he encounters it for the first time when he’s stolen away:

“Yellow and white ribbons of fire snaked before us in a black tunnel, and I froze in absolute terror. Lights ricocheted through the darkness on either side of me like shooting stars. We moved faster and faster. Wind roared everywhere.”

I’ve always been a science fiction fan eating up shows and movies like The Twilight Zone, Star Trek the Next Generation, Stargate, and Star Wars, so the idea of a portal for transport between worlds was already rich in my imagination. This is where the Lightning Gate came into play as a doorway connecting the Lightning Road between worlds and realms.

And to make it more fun, I created a gate key that had to be used to activate travels through the gate. I envisioned the gate key like a jeweled Rubix cube that fit into the gate using specific combinations to travel to a desired destination.  In this scene, Joshua encounters a gate key for the first time.

“Leandro pulled his satchel from under his cloak and lifted out a flat square that gleamed bronze. He set it on a slab nearby and pushed at its flat surface. In an instant, the paper-thin sheet popped up into a wooden cube the size of a tissue box. Gold sparkles moved through it. In the gold flickered colored squares of rubies and emeralds like a sun in the dark cave.”


So, I didn’t base any of the lightning powers in Joshua and the Lightning Road on science but rather all on my own vision. Lightning is big and scary and full of power – and this fuels my imagination to harness its power in my stories.

EXCERPT FROM JOSHUA AND THE LIGHTNING ROAD

The trees crowded around us, the deafening quiet of the woods pounding in my ears. Sweat broke out on my lip and I wiped it away. The one beast licked its lips in return, then curled its mouth in an awful grin, exposing vampire dagger teeth.
The beasts inched toward us. “We don’t want to hurt you.” Bluffing still seemed the best idea.
“And you won’t, my tasty morsels.” The leader panted hungrily.
The lightning orb. I had to trust in Bo Chez’s story and believe all its stormy, electric power could help us. But Sam had said the Greek gods lost their powers. Let it do something! And if it breaks, I’m sorry, Bo Chez!
Charlie clung to my arm so tight it cramped. Fire flashed out of the leader’s mouth, and a long flame roared toward us, cutting through the mist like a fire sword. All three of us stumbled back.
The beast pack leapt toward us like hairy dragons. The moss beneath our feet snapped with fire and heat roasted my face and arms. Fire raced up the wizard trees, and their wood shrieked in splitting agony.
“Run!” Sam dragged Charlie and me back.
Red eyes glared at me.
“Hi-yahh!” I flung the orb hard.
Blue light exploded into the space before us and knocked us all off our feet. I slammed sideways into a tree and slid down to the ground. The beasts were sprawled motionless before us on the blackened, smoldering moss. Trees smoked as flames flickered up them. Charlie and Sam lay a few feet away.

ABOUT JOSHUA AND THE LIGHTNING ROAD: Twelve-year-old Joshua Cooper learns the hard way that lightning never strikes by chance when a bolt strikes his house and whisks away his best friend—possibly forever. Armed with only luck and his grandfather’s mysterious crystal, Joshua must save his friend by traveling the Lightning Road to a dark world that steals children for energy. New friends come to Joshua’s aid and while battling beasts and bandits and fending off the Child Collector, Joshua’s mission quickly becomes more than a search for his friend—it becomes the battle of his life.

Joshua and the Lightning Road is available now through October 15th for just $0.99cents on e-book from these booksellers:     Amazon      Barnes &Noble      Kobo      Apple iBooks

ABOUT JOSHUA AND THE ARROW REALM: Joshua never thought he’d be called back to the world of Nostos so soon. But when his friend King Apollo needs his help in the Arrow Realm, Joshua braves this dark world once more in order to save him. With Joshua’s loyalties divided between Nostos and Earth, he must rely on his courage and powers to restore magic to this desperate world and to free its people. Abandoned by his friends in his quest, unarmed, and facing great odds, can he survive on instincts alone and not only save those imprisoned—but himself?

PRAISE FOR JOSHUA AND THE ARROW REALM: “Fast-paced and endlessly inventive, this is a high-stakes romp through a wild world where descendants of the Greek gods walk beside you, beasts abound, and not everything—or everyone—is as it seems.” –Michael Northrop, New York Times bestselling author of the TombQuest series

Joshua and the Arrow Realm is available through these booksellers: Amazon  Barnes & Noble      Kobo      Apple iBooks 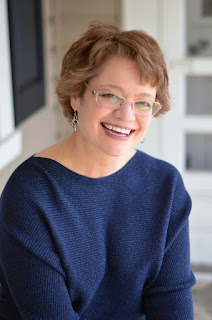 ABOUT DONNA: Donna Galanti is the author of the bestselling paranormal suspense Element Trilogy and the children’s fantasy adventure Joshua and The Lightning Road series. Donna is a contributing editor for International Thriller Writers the Big Thrill magazine, a writing contest judge at nycmidnight.com, and regularly presents as a guest author at schools and teaches at writing conferences. She’s lived from England as a child, to Hawaii as a U.S. Navy photographer. Donna also loves teaching writers about building author brand and platform through her free training series at yourawesomeauthorlife.com. Visit her at donnagalanti.com.


a Rafflecopter giveaway
Posted by Brenda at 7:00 AM