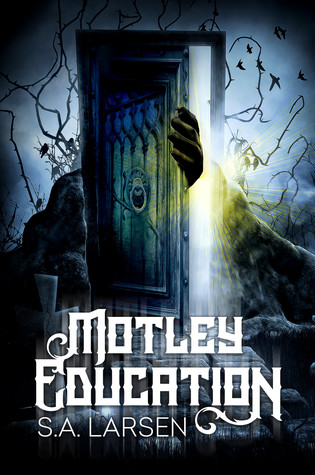 Motley Education by S.A. Larsen
Publisher: Leap Books, LLC.
Number of Pages: 325
Published:  September 15th, 2016
Source: In exchange for an honest review, a review copy was received from the author.
Why I wanted to read this:  MG Fantasy with Norse Mythology, and a School for the Psychically & Celestially Gifted.

Opening Lines:  "A glow pulsated from beneath the stone doors of the tiny crypt.  Dark mist seeped from the hinges in a long hiss.  Rumbling vibrated the ground, and the wrought iron fence caging in the cemetery chattered. "

That opening scene happens about three months before the current events with Ebony and Fleishman,  I really liked the image and suspense that it creates.

The two groups of students who go to Motley Junior High: School for the Psychically and Celestially Gifted are Sensories who can channel spirits and bend metals, versus Luminaries who read the stars or use charms, and potions.  Ebony really wants to be a Sensory, but she has been having difficulty in communicating with and seeing spirits. When Ebony is called upon to demonstrate her spirit tracking abilities to her class at Motley Junior High, she becomes increasingly nervous because of some mishaps she's had in the past.  She has all the right tools (her apprentice medallion, and celestial box), but things still go horribly wrong and Ebony is sent to meet with the headmistress where she is declared a "Seeker" or someone who is "undeveloped" in their skills.  Basically, Ebony is seen as a misfit.  She is given another opportunity to show her abilities by completing a special project for her Deadly Creatures & Relics class, transforming an object into something else.  But when her object, a stick goes missing, Ebony calls on her "go to guy" Fleishman for help.   As Ebony and Fleishman begin to work toward recovering her object, they learn that what she thought was just a stick is really an ancient relic needed to replenish the Well of Urd that nourishes the Tree of Life.

Motley Education includes lots of Norse mythology and a main character which I really got into. There's a map, list of terms and mythical characters at the beginning, as well as some important facts and terms at the end of the book.   You can take a quiz to find out if you're a Sensory or Luminary and I even found a really neat Educational Guide that aligns with the Common Core.    Ebony is constantly being told that she needs to take her skills seriously and apply herself, despite her attempts to do just that.  Lots of her talents were hidden even from her and over the course of the story, she begins to grow into her craft.   I loved the Norse mythology and how it was incorporated into the story, all the talk of the Tree of Existence and these doorways that Ebony opened.  Hela even communicates with Ebony during a dream and the main villain, a dark elf named Daenir tries to manipulate Ebony into giving him the ancient relic.  There's a really interesting mix of the spirit world and Norse mythology which I particularly enjoyed.  Many of the characters from Norse Mythology make an appearance and the world building is wonderful including lovely details about the setting of Peru, Maine, and places like The Hall of Souls.  With plenty of humor and adventure, I would recommend this for someone who likes friendship stories, Norse mythology and a bit of a mystery.

Favorite line:  " Growth comes through acceptance of one's self and situation, giving the ability to see into the bigger picture.  Don't long for what you think you should be. Concentrate on what you are now."