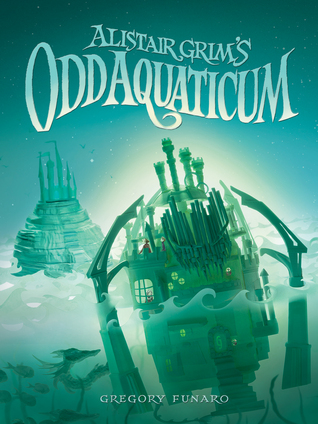 Opening line:  "Go ahead, Father said, and he passed me the Black Mirror."

Grubb's first apprenticeship was a chimney sweep for Mr. Smears.  That is until  Grubb chooses to stowaway in Alistair Grim's suitcase and ultimately finds himself on Alistair's Odditorium.   Being a mysterious twelve-year-old,  Grubb then takes one of the magical items he finds from the Odditorium outside, causing an evil necromancer named Prince Nightshade to become aware of their presence.  Prince Nightshade than attempts to steal the source of the Odditorium's power for himself.   The second book in the series begins shortly after the Odditorium has escaped the clutches of Prince Nightshade.  Alistair has taken Grubb on as his  apprentice and he's begun his training in how to control the mechanical aspects of the Odditorium, in hopes that one day he can take on the reins.  Prince Nightshade is still following their every move and since their last encounter, he has gone on to amass a large army of his own.  Yet, Alistair has also been makings plans that involve Merlin's map and a possible location for King Arthur's sword,  Excalibur. With it, he hopes to strike down Prince Nightshade for good.

Alistair's Odd Aquaticum has a bit of everything, adventure,  a magical house fueled by magical fairy dust and steered by a pipe organ, witches,  fierce warriors, a magical pocket watch, shades, sea dragons and even the legendary Excalibur.   I really enjoyed the way Funaro blended the steampunk, mechanical aspects of the Odditorium with the Arthurian legends  of Excalibur, Merlin, and the Lady of the Lake.   The Odditorium can even go underwater now, how cool is that?  I also felt like I was getting to know all of the other Odditoria's (living and inanimate objects) better than I did in the first book and it was lovely watching Grubb have some much needed bonding time with Alistair.  We learn some interesting facts about Mack, the Scottish pocket watch's past as well as some prophecies that are yet to come.  Perfect for someone looking for a bit of mystery and non-stop action.
Posted by Brenda at 11:31 AM