Today I have the wonderful pleasure of introducing Keira Gillett, author of the Zaria Fierce Trilogy.  As you may recall, I recently reviewed her first book, Zaria Fierce and the Secret of Gloomwood Forest.  I really enjoyed the setting of Norway and wanted to know more about the folklore behind her story.  Maybe also get a glimpse of some more of Eoghan Kerrigan's illustrations.  Lucky for me, Keira was able to take a bit of time away from drafting her third book and stop by for a chat.  Thank you so much for dropping by Keira!    I hope you'll stop back on Wednesday for my review of the second book too.

Zaria Fierce and the Enchanted Drakeland Sword by Keira Gillett
Illustrations by Eoghan Kerrigan
Release Date: November 6, 2015
Genre:  MG Fantasy/Adventure
Summary: If Zaria Fierce had her say, being a princess would mean you’d never have to wait for news. In the eight months since Olaf tricked her, Zaria has felt a near constant mixture of restlessness, listlessness, and hopelessness. When the time comes to fix past mistakes, she is more than ready to climb aboard the ship sailing towards the giants. Summertime in Norway promises many more adventures, but also many more perils… something sinister lurks beneath the surface following her every move, haunting her, disturbing her dreams, and stealing her peace. Can Zaria figure out what it is and stop it before it’s too late?

Available in E-book, Paperback, and  Audiobook formats.  See if you’re eligible to get a free copy of the audio book here.

Hi, my name is Keira Gillett and I’m the author behind the Zaria Fierce Trilogy, which is about a young adopted American girl that moves to Norway. On her 13th birthday she meets a troll on her way to school, who appears from under a bridge and threatens to eat her. The first book, Zaria Fierce and the Secret of Gloomwood Forest discovers which of them outsmarts the other. Does she trick him or does he trick her?


I’ve been invited by the lovely Brenda to talk you here at Log Cabin Library about the folklore that is a part of my world building for Zaria. Her world because it’s based in Norway features heavily of Norwegian and Scandinavian folklore and fairy tale creatures. One of my favorite races in Zaria Fierce is the ellefolken race, which are allies with the elves, whom they live near and intermarry. This race and kingdom came to me as I read a few lines of text that talked about alder tree girls. Why only girls? The men are mentioned briefly in passing. I was struck by these lines and returned to them often. The race of alder tree girls is supposed to be evil. They seduce men and lure them away to dance and possibly die or lose their memories. But I couldn’t reconcile that (and, also because there are so many evil women species that lure men into the woods it’s practically a cliché and I wanted to avoid that), so I looked up the meaning of alder trees. Due to their natural properties alder trees are considered rot-resistant and therefore resistant to corruption. That didn’t sound evil to me. That sounded like a guardian people, which is what I turned the ellefolken into. Now the name ellefolken means elle (elf) people, but I switched it up a bit to mean elk-people because of two beautiful paintings by John Bauer of a princess riding a moose (The Tale of the Moose Hop and the Little Princess Cotton Grass).

I knew after seeing them that I wanted Zaria to have a similar magical experience and midnight ride. I didn’t want a wild or domesticate elk though, I wanted the elk to be sentient. I thought wouldn’t it be wonderful if the elk could turn into a human being? So that is how my ellefolken race can change from elk to being to alder tree. The women have no problem transforming between their three forms, but the men in the species are limited and can’t transform at will. They can only transform in one direction and once transformed never go back to their old form. This helped me to explain why there are many more women than there are men. It was a conflict of power and freedom. 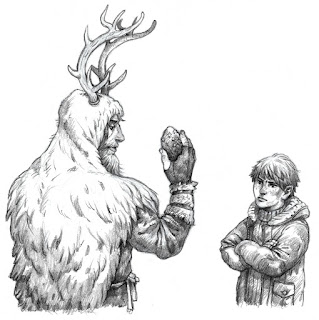 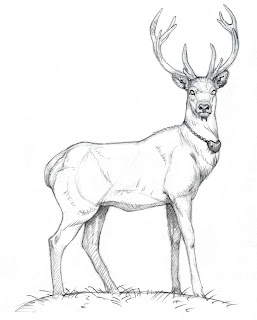 The Elleken kingdom is ruled by their Golden King (in alder tree form). I chose gold because it symbolizes purity. The face of the race is always the crown prince, known at the Stag Lord. He wears a cloak made from his elk hide (like a selkie, but unlike a selkie he can be separated from it without ill effects) and his antlers (which are gold) are part of the cloak’s hood, forming a crown. The spare is always in elk form and is a pure white creature with golden horns.


So how does this all tie together? In my Zaria Fierce books the ellefolken protect the world from dragons, who spread evil and fear and hate like a disease (or rot). The dragons try to escape their prison by corrupting the alder trees that form its barrier. To bolster the defenses the Stag Lord must join the Golden Kings, which is what Hector’s father, Hakon, wants him to do. Hector however loves his freedom and enjoys trading with the different magical kingdoms and humans. He doesn’t think like the giants do, that becoming one with nature is something to look forward to and not dread. His son also wants him to transform, but for more selfish reasons. He wants to have the freedom to leave the glade of the Golden Kings and explore Norway, which he can’t do until he becomes the Stag Lord. It’s a conflict that spans generations of fathers and sons. It was so much fun to research the different races of beings for the books. If you’d like to learn more about Norwegian and Scandinavian mythology and folklore, check out these books:
I hope this has whetted your appetite and that you're ready to learn more about Hector’s role in the Zaria Fierce Trilogy. Want to see who I would cast for him in a movie? Of course you do! Hehe.


Thanks Brenda for having me!

Filip slung his window open and tossed out his backpack. It landed in a thump in the hedgerow. Aleks pulled it out and slung it over his shoulder with his own bag.
“How’re you getting down?”
“Hopefully with your stargazer.”
“Then why toss down your bag?” Aleks asked, exasperated.
“Just in case,” Filip said with a wink at Zaria.
She suppressed a smile. She looked to the others, “Does anybody have rope?”
Aleks and Geirr both nodded. Then Geirr unzipped his bag and pulled out a neat coil from on top. He tossed it to Filip, who snatched it up as it sailed by the window. He disappeared into his bedroom and reappeared moments later slinging the coil out the window. It unraveled to the ground.
“Good,” Filip said briskly. “It’s long enough. Now let’s see if it holds.”
Filip quickly scaled the side of the house and they gathered their belongings preparing to dash. Without warning, Mrs. Storstrand stuck her head out of a bottom window and shrieked at the sight of them.
“Just what do you think you’re doing?” she demanded.
“Run!” Filip shouted, grabbing his friends’ sleeves and rushing for the street.
Aleks cursed and threw Filip his backpack while slinging his own around to the front and unzipping a pocket. He looked frazzled as he dug inside the opening. Mrs. Storstrand was quick. She was already out of the house and chasing after them. She threatened life and limb and the most terrible of all – letting Filip’s father know what he was about.
At last Aleks found the stargazer – a shiny purplish egg-shaped object perforated with stars – and almost dropped it in his haste. After a brief fumble, Aleks located the largest star, and hastily jabbed his finger into the hole. Just like that, Mrs. Storstrand froze mid-run. But so too did Christoffer, Filip, and Geirr.
Aleks looked at Zaria and to the others. “Damn,” he hissed. “Wait! How are you not frozen too?”


Praise for Zaria Fierce and the Secret of Gloomwood Forest (Book 1):

“Are you in the mood for an old fashioned magical jaunt? Zaria Fierce and the Secret of Gloomwood Forest by Keira Gillett is a classic “perilous adventure” book for middle grade readers.” Jennifer Bardsley, The YA Gal

“A captivating blending of fantasy storytelling with today’s technology. At the base of this tale is deep, abiding friendship that stands the tests of time, adventure and even danger.”
Kathy Haw, Goodreads Review

“A great book with a lovely story and amazing characters. It’s a fantasy and adventure book that will be the delight of Narnia fans and those looking for a bit of Norwegian folklore thrown into it.”  Ner, A Cup of Coffee and a Book

“If you’re looking for an action-packed adventure dipped in fantasy, look no further. This book kept me on my toes with its many cliffhangers and plot twists; it was quite hard to put down at times.” Meredith, All ‘Bout Them Books and Stuff

“I love when a story jumps right in and hooks me like this one did. I highly recommend you look into it if you are in the mood for a fun adventure. I also recommend that you get it for any book loving middle schooler you know.” Emily, Midwestern Book Nerd

Author Bio: Keira Gillett is a technical publications librarian, book blogger, world traveler, artist, and now author. She graduated from the University of Florida with a Bachelor of Arts in Drawing and Painting. From an early age her mother instilled a love of the written word, as such she has always been a big reader. Her first book, Zaria Fierce and the Secret of Gloomwood Forest, is about a young girl who must complete a quest to save her friend from a nasty river-troll.
Posted by Brenda at 7:00 AM

Hi Brenda! Thank you so much for having me. I loved getting a chance to talk about my world building for Zaria Fierce and Norwegian folklore. And of course I'll be by tomorrow to check out your review of book two. :D

This may be too advanced for my granddaughter, but it is one I will look into for her for when she's a bit older. Thank you!

My pleasure, I enjoyed learning about your process for world building. Best wishes.

I miss reading aloud books with my kiddo, it's such a great age to get them interested in stories. What kind of books does your granddaughter enjoy reading?

I love reading folklore, so as soon as I read Brenda's review of this book I knew I had to check it out. Plus, a close friend of mine is of Swedish descent and loves to read about folklore from Scandinavia.

It was such fun to learn more about Keira and where her ideas came from. I look forward to reading this one and diving into the world she created. :) Wishing her all the best!
~Jess