Classic MG Read-along: The Girl with the Silver Eyes by Willo Davis Roberts

This month's  pick for the Classic Read along with the Midnight Garden was The Girl with the Silver Eyes by Willo Davis Roberts.    You can follow along or join in the discussion at http://www.themidnightgarden.net or #tmgreadalong on Twitter.

Published: July 1st 1980 by Aladdin
Genres: MG Science Fiction
Pages: 192 pages
Format: Hardcover
Source:  Library
So my copy from the library was the 1980 hardcover  with the updated paperback cover being the one featured on the left.   I'm partial to the newer cover.   Katie seems to look much older in the older version to me and she kind of looks bored.  In the newer one, Katie's glasses are exactly as I pictured them when reading the story.   I also love the way the apple gleams and feel it gives her telekinetic powers a greater impact.  So this is another new to me book that I really enjoyed reading. 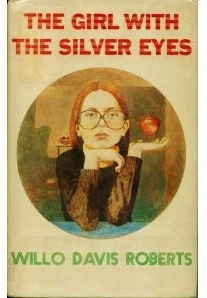 When Katie Welker was four, her parents got divorced and she began living with her grandmother.  But, now that her grandmother is gone, she has moved to the city to live with her mother.  Katie has always made people feel nervous, even her family.  Maybe it was her silver eyes, or the way that she never expressed any emotion on her face.  Or maybe it was because they suspected that she was peculiar and strange things always happened when she was around.  Objects would move, breezes seemed to appear out of nowhere, doors slammed and papers scattered unexpectedly.   But, people didn't know that Katie had always been able to move these things with her mind.  She'd tried to blend in, seem normal, but it can be exhausting pretending to be normal all of the time.   Now that Katie is in the city, she's faced with her mother trying to get her a sitter and a strange man who is asking a lot of questions about her.   Katie also uncovers that there were three other children born during the same time as her who might be just as peculiar as she is, and she plans to find them.

I enjoyed reading The Girl with the Silver Eyes, I can't say that I've read many books where the main character has telekinetic powers and telepathy. Well, Carrie does come to mind, but this is no way near that book.  The writing style defiantly had a classic feel to it for me.  A sort of gentler time, where your next door neighbor (Mrs. M)  is looking in on you.  I'm not convinced that this book would work as well now as it might have back then. There isn't nearly enough action and I so wish there had been more about Katie's powers.   There are a few humorous moments where she pulls pranks on her disgruntled neighbor Mr. H.  Like when he doesn't pay the newspaper boy and I did really like Katie's ability to tell what Lobo  (Mrs. M's cat) was thinking.  There were also lots of questions that I was able to ponder with my child as I was reading. For example, Katie questions whether having telekinesis makes her life easier.  Sure it would be cool to swirl leaves around you as you walked, but does putting sugar in your tea with your mind make things easier? When would these powers be most useful?  Also, would it be better to know an animals or peoples thoughts?  Katie ponders each of these as she is learning more about whether her peculiarities are due to something that happened to her, versus due to a freak of nature. What got me the most is how alone Katie feels, not accepted by her family and having no friends.  And what it means to want to be accepted for who you are.  Although, I was happy for Katie when she finally connected with the other children, I couldn't help feeling like the ending wasn't completely resolved for me.

Were there ever any sequels?  Have you ever read this before?  Feel free to leave a comment.