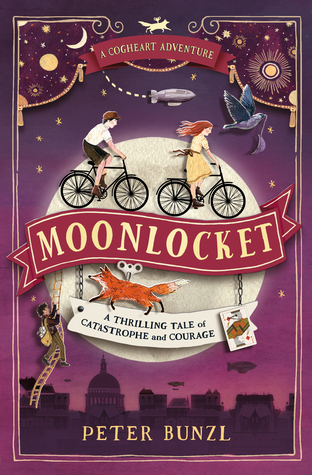 Moonlocket opens with a prologue and introduces the character of Jack of Diamonds.  A nefarious criminal who has just escaped from prison for yet unknown reasons.  This is a brilliant setup which sets the mood and excitement level for the story yet to come.  Bunzl then shifts to Lily and Robert relaying how Lily's mother died when she was six years old in a tragic accident.  How her father is a famous inventor and one of his inventions was instrumental in saving her life.  Robert is the boy who assisted Lily and who has come to live with her since his father died in the first book.  Lily's father would like to adopt him, but Robert is reticent and feels that he has unresolved issues to deal with first and he's still grieving and doesn't feel it's the right time.  Robert visits his father's shop often, but it's still a painful reminder of all that he has lost, his prior home, and that his father's shop now belongs to his mother, wherever she might be.  It's while at his father's shop that Robert sees a mysterious figure lurking about.  At first, he believes it's his da now as a ghost but soon discovers that what they were really after is the Moonlocket, a locket with mysterious markings that holds a hidden clue to Roberts past and might lead him to his mother.

I am so enamored with these covers, the steampunk aspects of zeps combined with Malkin the mechanical fox, the kids riding their bikes and even the playing card.  Just gorgeous.  The tag line is also so perfect for the story, "a thrilling tale of catastrophe and courage." Yes and yes.  I was excited that Robert had the opportunity to tell more of his story about his mother's disappearance and his connection to the missing Moonlocket.  Lily and Robert make a fantastic team and I love how they support each other.  Lily's no-nonsense approach and how she won't be talked out of "going on a ghost hunt" with Robert.  They're creative, fast thinkers and although at times they get overpowered by the adults, somehow they manage to outwit them as well.  And Malkin, the sarcastic mechanical fox, who adds just the right amount of humor.    Moonlocket also features a cryptogram or engraving of words on the locket so is perfect for kids who like to solve puzzles.  Such a fun adventure that is both a touching and a heartfelt testament of friendship and courage.

Favorite lines:  "...when you lose someone close, the gifts they gave you become keepsakes to remember them by - it's as if they magically contain a part of that person.  And when you mislay such a gift, it is like losing that person all over again.  But when you recover it, it is always a great and unexpected blessing."