MG Fantasy review of The Bone Garden by Heather Kassner 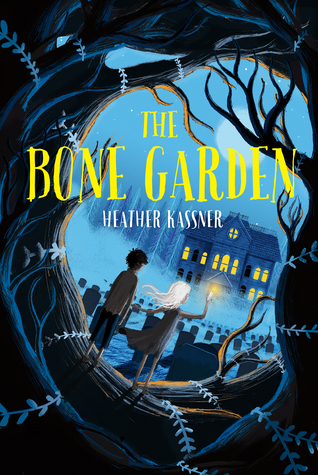 The opening lines and book description of The Bone Garden is what instantly hooked me.  There's something about graveyards that conjure up the images of gravestones, moonlit nights, caskets, and the potential for ghosts, of which there are none in this story.  It's just the right amount of dark, creepy and the perfect setting and atmosphere for this story.  I knew I was in for a treat.  I've seen reviews that compare The Bone Garden to Monstrous, The Graveyard Book and Coraline, which I full heartedly agree with.

Each day Irréelle travels through the tunnels and passageways of the underside of the graveyard collecting bone dust for Miss Vesper.  A task that Irréelle eagerly completes because pleasing Miss Vesper is her highest priority.   Irréelle is tethered to Miss Vesper for her very existence due to being created by bone dust and Miss Vesper's imagination.  A fact that Miss Vesper will never let her forget,  one false move can lead to  Irréelle's existence being wiped out in a blink of an eye.   All Irréelle wants is to make her creator happy, which is turning out to be more and more difficult each day.  Irréelle both loves and fears Miss Vesper, making her the kind of character that you immediately feel sympathy for.  As far as villains go, Miss Vesper would be right there at the top of the list.  She's cruel, demanding, ill-tempered, and speaks to Irréelle with words as sharp as knives, leaving her constantly on edge.  Miss Vesper is kinda like this mad scientist from Frankenstein mixed with Cruella de Vil who creates children from spare body parts, bone dust, and her imagination.   Though her creations can also be imperfect.  For example, when Miss Vesper created Irréelle, she ended up with a spine that is crooked and limbs that are misaligned, leaving her with a limp.  Yet Irréelle persists in completing her tasks with the hope that someday Miss Vesper will use her magic to make her real.

Lately, however,  Irréelle's imperfections have led her to become even more forgetful and clumsy, and despite the best of intentions in pleasing Miss Vesper, she ends up doing the inexcusable, unforgivable.  She crushes one of Miss Vesper's newest creations, a hand that when it comes to life begins to attack Irréelle.  Even though Irréelle pleads with Miss Vesper that it was just a mistake, that she was only trying to defend herself, Miss Vesper has had enough and decides it's time to break their tether.  While Miss Vesper gathers supplies for a bonfire, Irréelle manages to escape into the passageways below ground.  But, Miss Vesper won't let one of her creations go so easily and sends her bats after her.

As Irréelle tries to escape through the tunnels, she stumbles across a boy (Guy).  He too is one of Miss Vesper's creations.  Originally he was sent to find "an unmarked grave that is very clearly marked," and when he was unsuccessful, was buried under a pile of rocks, it never pays to anger Miss Vesper.  Irréelle believes that Guy may just be what she needs to get back into Miss Vesper's good graces if they can complete her impossible task maybe she can be forgiven.

Irréelle's time is initially spent below ground, carrying a candle to illuminate her way through the tunnels to extract bone dust, which is certainly creepy but not too scary.  She's a dutiful girl, very eager to please.  Other than the anger and contempt Miss Vesper shows her, she is in no true danger at first.  Even Miss Vesper is not quite as scary as I thought she was going to be, although she certainly is unkind and cruel in her treatment of Irréelle.  She can conjure up bats made from dust so probably best not to get on her bad side.  There's an element of adventuring and mystery as the duo makes their way above ground and through the cemetery trying to figure out why Miss Vesper is so desperate to find this unmarked grave.  Who's remains does it hold and what does she intend to do with them?  Things also take an interesting turn when they run into an unexpected ally, a girl named Lass who's also been sent by Miss Vesper to search for the unmarked grave.    And danger does come when they have a run-in with the watchman from the cemetery and are returned to Miss Vesper's clutches.  It's within these moments that Irréelle's character shines, she acts boldly to save her friends and learns that she has the inner strength, and determination to resist being compelled to do what someone else wants.  I really enjoyed her transformation and the way in which the story was resolved.
Posted by Brenda at 7:00 AM