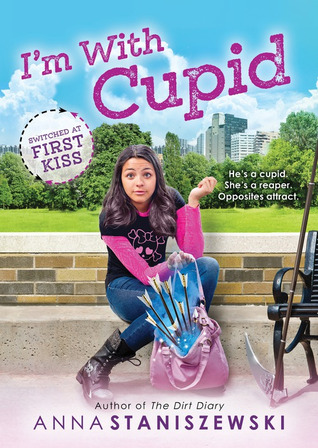 Published by: Sourcebooks Jabberwocky July 7th 2015
Genres:  Fantasy
Pages: 240
Format: PaperbackSource:  Review copy received from publisher for the purposes of the Cybils
Series:  Book 1 in the series with the sequel, FINDERS REAPERS, due out in March 2016.

My first introduction to Anna Staniszewski's writing was The Dirt Diary, which was nominated last year in the Realistic Fiction Category of the Cybils.  I really enjoyed it and was looking forward to reading another book from her new series which was nominated this year.

In this newest series,  I'm with Cupid, she has an interesting twist on the premise of switching up two characters.  I'm pretty familiar with the body swapping idea from movies like Thirteen Going on Thirty, Freaky Friday or It's a Boy Girl Thing.  You know the one where a thirteen year old girl becomes a thirty year old women, or a mother and daughter or boy and girl swap bodies.  I'm With Cupid isn't quite that kind of swap, instead the characters swap powers when they are dared to kiss at a party.   You see Marcus is a Cupid and Lena is a reaper.   As you can probably guess, this results in some pretty humorous consequences.   What I enjoyed most about the book was how they really were such opposites of one another and their swap really brought them face to face with the thing they've been avoiding themselves. Marcus was so adorably shy, awkward and hopelessly smitten with Lena (for which she has no clue), he's also been holding on to things because he can't let them go.  He's emotional, for which he took way to much flack from his father over.  Being a Cupid, he believes in love at first sight, romance and there is someone out there for everyone.   Whereas, Lena doesn't believe in love or such fairy tale things.  She feels she is practical, well adjusted and grounded over ideas like moving on and that death is just a part of life.  Her approach to things is very different then that of Marcus, which just makes things more interesting and  difficult for the two of them when they have to adjust to their new found powers.  Lena and Marcus have to really communicate with each other about having powers and teach each other how to use them correctly.  So you can imagine there are some mishaps when you put a reaper in charge of sparking attraction between two people and then also put Cupid in charge of collecting souls.  Overall a very quick read and sweet introduction to a new series.

Disclaimer,   I'm With Cupid has been nominated for the Cybils award and my review reflects my personal opinion, not the opinion of the Cybils committee.
Posted by Brenda at 9:41 AM 2 comments: 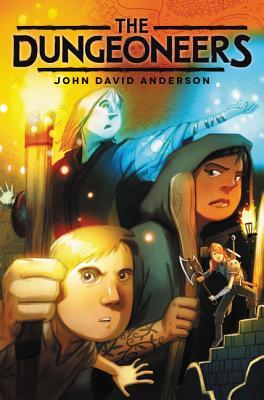 Pages: 448
Format: HardcoverSource:  Library
Series:  Book 1 in the series with second in May 2016

Twelve-year-old Colm Candorly lives with his parents and eight sisters.  Sister's who torment him to no end, yet also are the ones that have unknowingly honed his skills in the "art of subterfuge and avoidance," because getting away from their pinches and constant giggles takes some skill.  At the same time,  Colm dearly loves his sisters, so when one sister takes ill, he tests out his skills by pick- pocketing from some of the wealthy town residents.  Medicine after all takes lots of coins.  When Colm's father finds out where the money came from, he can't abide having a thief in the family and plans to confess to the local magistrate and return the money.  He hopes they will be lenient on Colm.   Instead of going to jail or having his hand chopped off, the plan is for Colm to go with Finn Argos to see if he has the talent to become an apprentice within Master Thwodin's guild of Dungeoneers.  Master Thwodin runs a school to train rogues, barbarians, mages and druids in the art of entering dungeons to retrieve their treasures.

Anderson wonderfully establishes Colm's family life very early on in the story.  Colm with all of his noble reasons for wanting to pickpocket, stemming from his desire to help his family. I really enjoyed Colm's younger sister, Celia and how she gives Colm her hairpin (most prize possession), because she knows he will bring it back.  Family is very important to the story, and given that his father doesn't make enough money as a cobbler, Colm see's it as his role to help out.  Colm also has a strong desire for adventure and to not end up like his father, struggling to make enough money to take care of the family.  It's easy to see why Colm see's Finn Argos as a means for adventure.   Finn Argos sees potential within Colm as a rogue and initially takes on an advisory role as they travel to Master Thwodin's castle.  Later, he is the one who puts forth Colm's first test of his skills when he pushes him down a hole into a dungeon.  Finn is the one who teaches him the ins and outs of what a rogue is, and explains his many rules to being a rogue, with all of his sub-corollaries.  Colm  isn't what you think of as a "rogue," he isn't really a scoundrel or unscrupulous, but he does end up getting to learn how to spot and disable traps, pick locks, and sneaking by attackers, which are all pretty cool.   Finn also teaches Colm the honor code or "only stealing what is rare and unique,"  and the rogues motto of "ready for everything, guilty of nothing." Throughout Dungeoneers there are many supporting characters that Colm meets, starting with the ones he meets when was pushed down that hole to begin his "real test" to be an apprentice.  There is Lena (a barbarian who's inclination is to "stab it" then ask questions), Serena (a druid who has the ability to talk to animals and insects), and Quinn (a mage who has a stutter when he is nervous and is still learning to control his magical abilities).  Each of these characters have some sort of flaw to their abilities that they will need to overcome to be an asset in the dungeon, which ends up being a challenge that they end up facing.   Some of the most amusing moments are getting to know Lena, Serena and Quinn and watching them interact as they try to escape the dungeon.  There are also many suspenseful moments as well as a nice twist at the very end of the book.  Plus, Thwodin's school was intriguing with classes in history of Dungeoneering, Basic Survival Skills, and Dungeon Ecology. Even the teachers were as interesting to me as the sub-characters and classes.  Overall a wonderful story about a party going on a quest into a dungeon, trying to solve whatever traps get in their way, battle any attackers and get out with whatever treasure that they can find.

Disclaimer,  The Dungeoneers  has been nominated for the Cybils award and my review reflects my personal opinion, not the opinion of the Cybils committee.
Posted by Brenda at 11:51 AM 2 comments:

The Copper Gauntlet by Holly Black and Cassandra Clare Callum has returned to his father for the summer and things between the two feel "strained." Callum feels his father is still upset at him for getting accepted into the Magisterium, despite Callum trying to fail.   Plus, entertaining and keeping Havoc hidden (Callum's Chaos wolf) at home has been challenging. When Havoc ends up missing, Callum goes to investigate and finds him muzzled and chained in the basement next to a bed with shackles.  Fearing that his fathers has horrible plans for him and Havoc, Callum flees to Tamara and eventually returns to the Magisterium to begin the next year.  But, Callum's problems only follow when he finds out that The Alkahest has been stolen by his father, and he plans to turn it over to the enemy.   Call and his friends sneak out of the Magisterium to try to recover the Alkahest, because in the wrong hands it can be used as a weapon to destroy the Makar, Aaron.

Most of the action of The Copper Gauntlet takes place outside the Magisterium, which was both a good and bad thing for me.  I kinda like the school, with its deep underground caverns, and there really weren't any classes with Master Rufus this time around.  How are they so adept at using their abilities without a little training? Plus, there were less opportunities for getting to know more about Warren the lizard.  Yet, with all the action Aaron, Tamara and Callum began to draw closer, so I'll take that.  And with Jasper  joining them on their quest for the Alkahest,  there is the addition of some entertaining moments.  Mostly because Jasper doesn't trust Callum, but also because you can never truly tell whether Jasper is on their side or not. His character is really growing on me.   In the very beginning of the book Callum also kept an "Evil Overlord" list, or running tally of things that he felt put him in a"good" or "bad" category, so it was interesting to see how even Callum struggles with which side he falls on.   One thing that did get tiring was the number of lies, Callum lying to Aaron and Tamara, Tamara lying to Callum when she says she wont tell about his dad,  and Callum continuing to lie at the end to the Magisterium.   Callum spends a large part of the time worrying about how everyone will feel once they find out his secret, so I'm glad that at least he was able to finally reveal it to Aaron and Tamara.    Overall, I like how things are progressing in the series,  and hope we will see more within the Magisteium itself in the next book.

Disclaimer, The Copper Gauntlet  has been nominated for the Cybils award and my review reflects my personal opinion, not the opinion of the Cybils committee.
Posted by Brenda at 11:31 AM 4 comments: