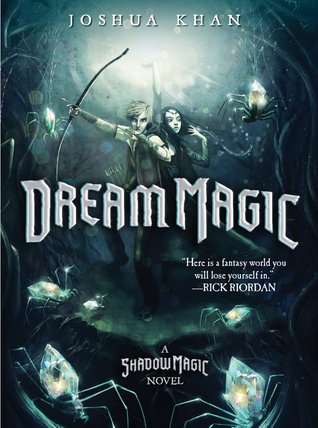 Why I wanted to read this:  Shadow Magic was one of the books that I read while judging for the Cybils this year that I absolutely adored.  This was my blurb for it when it went on to the final round,  13-year-old Thorn was just sold as a slave to the executioner of Gehenna, a kingdom famous for its dark magic. Lillith Shadow has just become Gehenna’s queen when her parents and brother were mysteriously killed and must learn to rule the land of the undead. When Thorn and Lily’s path cross in Gehenna, the two join forces to find the killer of Lily’s parents, while also trying to stop an assassin targeting Lily. Shadow Magic is an action-packed fantasy filled with all manner of creepy characters (dead and alive), including an enormous, and rather helpful, bat. It’s a captivating mystery full of magic, with touches of humor and characters to cheer for. It’s perfect for those who like fantasy with a delightfully Gothic twist.  (it even won for best Elementary/Middle-Grade Fiction).

I was really excited to see that the sequel was coming out, and as soon as it was on NetGalley requested it.  With spring break quickly approaching,  I treated myself to a re-read of Shadow Magic and Dream Magic as well.

Dream Magic takes place shortly after the events of Shadow Magic.  The would-be assassin has been caught and Lily and Thorn are acclimating to their roles in Gehenna.  In Shadow Magic, Lily tore open the Veil separating the land of the living from the dead and now has to deal with the consequences, zombies and spirits are roaming throughout Gehenna.   She has been meeting with her father's ghost who can only appear in the library and attempts to learn how to control her shadow magic.  While Lily is the ruler of Gehenna, she also has restrictions placed on her that keep her from using magic, including an ancient curse that forbids women from performing magic under the penalty of death. Yet, Lily is strong willed and uses her magic to save Thorn, even if it causes her people to fear her and leads to some unwelcome side effects.  Thorn meanwhile is searching the countryside with Hades for the source for the recent mysterious disappearances of people and attacks in the nearby villages, which is suspected to be due to trolls advancing on Gehenna.   Lily is then attacked and her precious skeleton key (which allows her to enter the library) is stolen by a mysterious man called the Dreamweaver, she and Thorn learn that he has an army of jewel spiders and plans to use them to gain control over Gehenna and exact revenge on Lily's family.

I really wish this series was getting more recognition, it's such a lovely fantasy and delightfully creepy while having a nice balance between the darker story elements (zombies and jewel spiders that come crawling out of dead bodies and who's bite puts you into a dream state) with these humorous and light moments.  One of my favorites is a dinner party that Lily is holding and she has the zombies serving her guest's their soup.   I love how despite Thorn finding it strange that Lily grew up with zombies for a nursemaid, and can commune and command the dead, they have a warm fondness and friendship with each other.  There's even an epic sky battle aboard a cloud ship where Thorn and Hades are put into danger, and I'm hoping we'll learn more about their bond in the next book in the series.  Lily and Thorn struggle to help their friends, to do the right thing and there's the dynamics of two people who've lived very different lives.  Shadow Magic and Dream Magic were such a fantastic enjoyable read for me and I can see myself revisiting this series again.  I loved everything from the world, action, creepiness factor, to the characters, humor and the shadow magic itself.   I also appreciated that Khan didn't end either of these books with a cliffhanger and although they could stand alone, I still wanted to re-read them both.  There's some lovely detailed prose, with the description of the Old Keep of Castle Gloom being one of my favorites, "Seeds, drifting in from beyond the walls of Castle Gloom, had found fertile soil, and grown, undisturbed by mortals.  Ivy crept over the battlements, thick, black, and shimmering with ice.  Scarlet roses bloomed despite the snow, their heads hanging from worn statues like blood drops. Oak trees rose from the broken flagstones, their branches having brought down the walls and now spread out high and wide over the keep."   Did I mention that there are also really lovely illustrations?  Hope you get the opportunity to read this and if you have, feel free to comment and let me know what you thought.

Many thanks to Disney-Hyperion and NetGalley for the E-Arc of Dream Magic, which in no way affected my opinion or review of this book.
Posted by Brenda at 11:05 AM