Today, I am really excited to have Keira back on my blog to talk about 10 Book Title Facts for her latest book, Zaria Fierce and the Dragon Keeper's Golden Shoes!  As you might have noticed, I've enjoyed following her series and particularly like the Norwegian setting and folklore.  And the illustrations by Eoghan Kerrigan are beautiful. 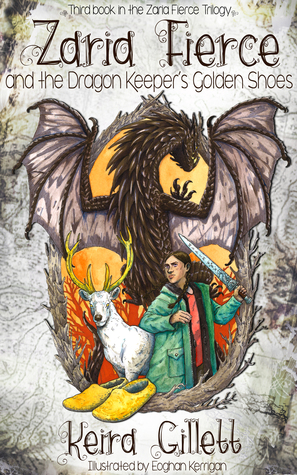 “Nothing can save you now, Princess.” How can anyone be tricked twice? Isn’t there even a saying about that? Zaria Fierce is determined to get things right this time and with the Drakeland Sword in her possession she’s ready to take on trolls, dragons, and whatever else may come… but first she and her friends are going to have to figure out just how much trouble they’re in at home.

Good day everyone! My name is Keira Gillett and I'm so glad to be back here at Brenda's fabulous blog talking about my Zaria Fierce Trilogy. The story revolves around a young girl who moves to Norway, meets a troll, and goes on a quest to save her friend, making new friends along the way and discovering magic powers. The final installment, Zaria Fierce and the Dragon Keeper's Golden Shoes was so much fun to write and I'm thrilled to share it with you all. I hope you enjoy this behind the scenes look at the book's title.
So now you've seen some of my thought process for coming up with the book title for the third Zaria Fierce installment. Which title is your favorite? Thanks for having me Brenda! Readers, if you stick around there's giveaway information at the end! One lucky person has a chance to win a Zaria Fierce audiobook package. Keira Gillett is a technical publications librarian, book blogger, world traveler, artist, and now author. She graduated from the University of Florida with a Bachelor of Arts in Drawing and Painting. From an early age her mother instilled a love of the written word, as such she has always been a big reader. Her first book, Zaria Fierce and the Secret of Gloomwood Forest, is about a young girl who must complete a quest to save her friend from a nasty river-troll.

“That’s the great thing about the Zaria Fierce trilogy: adventure is fast, furious, and loaded with Norse mythology, but the friendship between Zaria and her group of friends is the heart that drives this story.”
- Rosemary, Mom Read It

“Zaria Fierce and the Dragon Keeper’s Golden Shoes was the magical conclusion this trilogy asked for. Filled with action and adventure, Zaria and her friends showed us the importance of teamwork, friendship, and having courage in ourselves. The perfect ending to a fun series, I recommend this to all fantasy lovers, middle school and beyond!”
- Emily, Midwestern Book Nerd

“Zaria Fierce and the Dragon Keeper's Golden Shoes was a spectacular conclusion to a great trilogy (though the ending left the door open for more adventures). Filled with magic, a great story line, amazing and real characters, wonderful settings and beautifully explored themes, Keira Gillett created a trilogy that I will always cherish and will visit anytime. If you like The Chronicles of Narnia, The Hobbit, The Spiderwick Chronicles or simply love a book filled with Norwegian folklore and fantasy, then this is the ultimate series for you to read, devour and lose yourselves in.”
- Ner, A Cup of Coffee and a Book

Hector was right that the group wasn’t far from Malmdor. They reached the entrance before night fell, and in the gloomy dusk that slipped around them like a cloak, they reached the edge of the forest and stopped. Below them in a wide clearing was an abandoned quarry filled with water.
The lake was nestled at the bottom of a deep, steep pit. Its deep blue water was smooth and glassy, protected from wind by the rocky walls and surrounding forest. Zaria could see the lakebed in the shallower areas. Something large swam in the center, too deep to see clearly.
“What is that?” asked Filip, having spotted the creature at the same time.
Hector said, “It’s a water-wyvern.”
“Is that like the Loch Ness Monster?” asked Christoffer. “Cool. No wonder they can’t find it in Scotland.”
“You haven’t seen a winter-wyvern,” Zaria said. “I bet it’s more like Norwick.”
“The flying snow leopard-bear-bat thing you told me about? Even better,” Christoffer said, rubbing his hands together in glee. “Do we get to meet it?”
“Is it friendly?” worried Geirr.
“The beastie is not friendly,” said Hector, grimly. “And yes, we will be meeting it. Water-wyverns are wild, unpredictable creatures. This one is particularly nasty. It was captured and transported to this quarry lake over a century ago. It can’t escape – water-wyverns aren’t able to live out of water for very long. This makes it very angry. The lake is too small for him.”
“That’s what I was afraid of,” Geirr said, stuffing his hands into his pockets. “So, can it eat us?”
Hector nodded. “It once devoured an entire legion of dwarf handlers because they smelled bad. They’ve showered regularly ever since.”
Geirr looked at Zaria. “Why?” he moaned. “Why do we have to meet it?”
“Look on the bright side, mate,” Filip said, clapping Geirr on the back. “Maybe we get to ride it.”
Hector shook his head. “The water-wyvern is the guardian of Malmdor. Its job is to keep out all trespassers.”
Christoffer sighed, disappointed. “Too bad. I would have loved to ride him.”
“Will we have to feed it to get by it? What does a water-wyvern eat?” Aleks asked, readjusting his backpack and bow.
“It eats whatever it can catch,” Hector said forebodingly. “We’ll have to be careful as we near the shoreline. A water-wyvern might not have much in the way of limbs, being adapted to the water, but it has enough leg-power to propel itself onto the shore and attack.”
“At least it can’t fly,” said Geirr, relieved. “Small favors.”
Zaria and her friends gasped as it breached the surface, blowing out a large stream of air. The water-wyvern was magnificent with a gray-and-white pattern. It had a seahorse face, with a long snout, and no ears. The top of its head bore a wavy crest that trailed down its neck.
As the creature dove beneath the water, it flipped its body into the air. There were no scales anywhere on it, as far as she could see. Zaria half-expected a whale fluke, but its tail looked like an eel’s. The thing was massive, at least four times bigger than Norwick, and hideous.
They stood there, watching the shifting, undulating, shadow in the water. Aleks wore a pensive frown, his brown eyes narrowed. “Does it have a name?”
“The dwarves call it Vingar.”

Keep up with all of Keira's latest news on her: