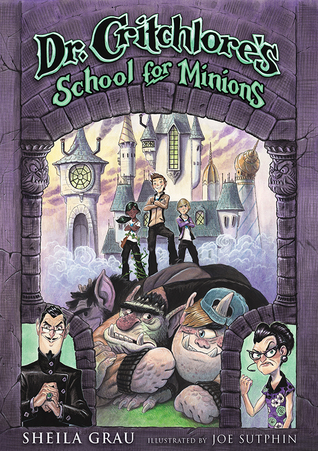 "Welcome to Dr. Critchlore’s School for Minions, the premier trainer of minions for Evil Overlords everywhere. No student is prouder to be at Dr. Critchlore’s than Runt Higgins, a twelve-year-old werewolf. (At least he thinks he’s twelve. He was abandoned at the school as a baby, so he can’t say for sure.) Runt loves everything about Dr. Critchlore’s. He loves his classes—like History of Henchmen and Introduction to Explosives. He loves his friends—like Darthin the gargoyle and Syke the tree nymph. And he loves his foster family, who took him in when his wolf pack couldn’t.

But not everyone loves Dr. Critchlore’s as much as Runt. After a series of disasters, each worse than the next, it’s clear that someone is trying to shut the school down. It’s up to Runt, who knows the place better than anybody, to figure out who’s behind the attacks . . . and to save his home, and Dr. Critchlore himself, from total destruction." (Summary from Goodreads)

I have to admit I was really drawn in by the illustrations on the cover by Joe Sutphin.  This also seemed like a book that my kiddo would really enjoy.  The story starts out rocky for Runt as he is entering his third year at the School for Minions,  and is desperately trying to become a Junior Henchman Trainee.  Nothing seems to be going right, he doesn't get placed in the right dorm, he has some tough competition to get into the training program, Dr. Critchlore is behaving oddly and someone has been sabotaging the school.  If things keep going this way, there won't be any school to attend.   So far so good, pretty original plot idea, some mystery, action, funny situations.  There is a diverse group of characters, explosions, dungeons, laboratories, trips to the cemetery and some nice twists.  Instant kid appeal, plus the illustrations throughout are quite engaging.  Not being the target demographic, the pace was a little slow for me.  I knew it was going to take sometime to introduce the world and characters, but there were quite a few times when it was day to day happenings at school.  However, this is one of those books that kids will just eat up.  They will want to unravel the mystery of who is behind the sabotaging of the school and the pranks provide for some great entertainment.  Mine just loved it and we will be keeping an eye out for any sequels.

Thanks to Aeicha at http://www.wordspelunking.blogspot.com/ and the publisher for Dr. Critchlore's School for Minions (given away as a part of March Middle Grade Madness.)