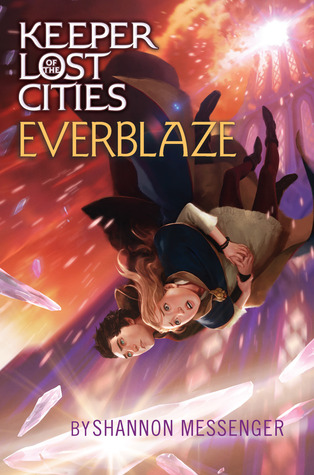 Everblaze (Keeper of the Lost Cities #3)  by Shannon Messenger

From Goodreads:  "Sophie Foster is ready to fight back.
Her talents are getting stronger, and with the elusive Black Swan group ignoring her calls for help, she’s determined to find her kidnappers—before they come after her again. But a daring mistake leaves her world teetering on the edge of war, and causes many to fear that she has finally gone too far. And the deeper Sophie searches, the farther the conspiracy stretches, proving that her most dangerous enemy might be closer than she realizes.   In this nail-biting third book in the Keeper of the Lost Cities series, Sophie must fight the flames of rebellion, before they destroy everyone and everything she loves."

It's been a little over a year since I've read the second book in the Keeper of the Lost Cities series and what with the fourth book coming out in November, I thought it was time to get a little caught up.  You can read my reviews of the first and second books here and here. The first thing I noticed when picking up the book was its beautiful cover, each one is more gorgeous then the next.  I love how it features a different character alongside Sophie and it seems to relate to something pivotal in the story.  It was also hard not to notice the lengthy page count, 624 pages.   This book looks huge and a little intimidating, but I'm not easily discouraged.  I didn't however expect that I would finish reading this within a day,  I truthfully couldn't put it down.

I love how Messenger has created this interesting world with all these characters that have unique abilities (telepathy, pyrokinetics, and infliction etc.).  Some obliviously good and others, well they can cause horrible fires.  Sophie is one of the exceptional ones, because her abilities were created by the Black Swan organization. Why?  She doesn't really know. Everblaze continues the plot of Sophie trying to piece together her past with plenty of danger, action and mystery to solve.  There are also plenty of twists, which I didn't see coming.  Most of all are the friendships and family.  I don't mind that the story is slowly unfolding across the series, it gave me an opportunity to get to know Fitz, Keefe, Dex and Biana better.  And I'll admit, I'm caught up in the who will Sophie choose between the three guys vying for her attention.  Messenger certainly doesn't shy away from putting her characters into tough positions and once again there are some very heartfelt moments.  Plus, that cliffhanger ending.  Still more lovely to look forward to and hopefully more answers as well.