MG review of Rise of ZomBert by Kara LaReau, illustrations by Ryan Andrews 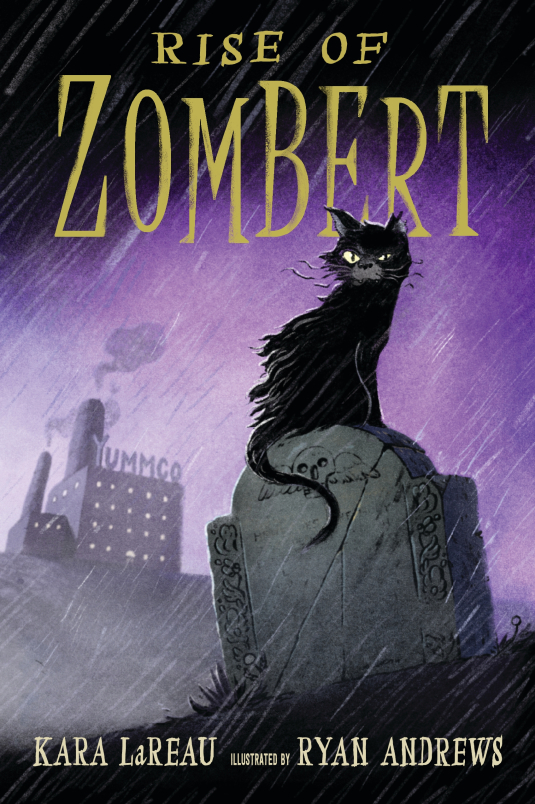 Opening Line: "It was a cold fall night in the town of Lambert and the moon was full."

Strange, peculiar things are happening in Lambert.  On one very cold fall night, a cat escapes from his cage, slinks through a fence, and falls into a dumpster.  Cold, tired, and very hungry the cat waits.  Much later he is found by a young girl named Mellie.  Mellie was out helping her best friend Danny, a horror film aficionado with his latest horror film project when she heard noises coming from the dumpster.  Mellie is instantly taken with this scraggly stray cat, but Danny is a bit more skeptical.  Unswayed, Mellie picks the cat up and names him Bert.  Then she sneaks him into her house, despite knowing there is no way her parents would ever approve of letting her keep him.  Because Mellie's parents have been so distracted with her younger brothers and their blog, she figures they probably won't notice anyway.

Mellie tries desperately to care for Bert, but he's sort of standoffish to her affection, preferring to roam at night and bring her small gifts of decapitated animals in the morning.  Bert seems to have plans of his own but first, he is focused on regaining his strength.  Danny is still very wary of Bert, especially after the cat appears to eat the heads of his victims so Danny starts to refer to him as ZomBert.  However, Mellie isn't convinced that her new friend is as evil as Danny makes him out to be.  Meanwhile, there are also mysterious happenings at the nearby YummCo food factory, several researchers and a hazmat team have been spotted in town.  What or whom are they searching for?

Rise of ZomBert is the first book in a new middle-grade series by Kara LaReau.  It kinda reminds me of a mixture of Bunnicula and maybe Mrs. Frisby and the Rats of NIMH.  Probably because Bunnicula gets accused of being like Dracula and I guess I'm recalling animal testing from Mrs. Frisby and the Rats of NIMH.  Rise of ZomBert is on the shorter side but would be wonderful as an introductory book into more scary stories.  That is if the idea of decapitated animals and the crunching and munching of Bert chomping on his prey doesn't bother you. This is a solid first book and is also a highly entertaining read.  A little macabre but not too scary, and who couldn't love a cat with a questionable past?

**Thank you to Candlewick Press for the ARC.**
Posted by Brenda at 8:31 AM