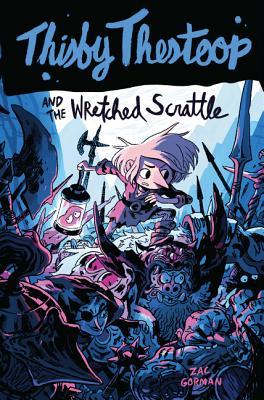 Opening Line:  "It was raining, because of course it was."

Book one, Thisby Thestoop and the Black Mountain was a Cybils finalist for MG Speculative Fiction in 2018.  Here's the description of the story from Sherry: "No one would have picked Thisby Thestoop to be the heroine of a great adventure. And yet, this foundling girl (whose only friend is a slime named Mingus), who lives in a dungeon, feeding and cleaning up after its monsters, saves a prince and princess. The perilous journey of the two very different girls, Thisby shy and grubby and Iphigenia beautiful and entitled, shows how a friendship can be made under the most challenging of circumstances, and the challenge of maintaining a friendship even when trust is broken. Witty, funny, and full of feeling, with memorable characters, both major and minor, this will appeal to gamers and fantasy fans of all stripes, especially those who are looking for real characters with whom they can sympathize and identify."— Sherry Early, Semicolon

Book two in the series takes place a year after Thisby first led Iphigenia to safety through the Black Mountain.  Since that time, she's become an adept gamekeeper, she knows all the short cuts, dangers, and monsters that call the dungeon their home.  Everything has always run smoothly under her capable hands.  But now that the King has appointed Overseer Marl to run the Black Mountain dungeon drastic changes are headed her way.  Suddenly the dire rats are acting strangely, there's a mysterious monster on the lose in the dungeon killing the other creatures and there are even rumors that Umberfall is planning to attack the Kingdom of Nth.  One of the Overseer's first decree's is to reinstate the Wretched Scrattle, a race to the top of Castle Grimstone where the winner will become the new leader of the Black Mountain Dungeon.  At first,  Thisby isn't interested in competing to become the dungeon's new master, her heart after all lies in being its gameskeeper, but when it becomes evident that she's needed to save the mountain, Thisby does step up for the challenge.

I quite enjoyed Thisby's adventures in the dungeon, exploring the underground winding river while avoiding the giant albino alligators and other monsters.  I especially love Mingus, Thisby's slime advisor/friend by her side.  Book two sees the addition of a few new characters that keep things interesting,  like Jono the skeleton who is assigned as Thisby's personal assistant in the dungeon and the twenty-four ghouls put in charge of helping to feed the monsters.  Once the competition gets underway Thisby also meets some of the competitors like Vas the noble who brought along his own hunter, Donato, and conjurer, Bero.  And although Iphigenia isn't helping Thisby directly with the competition, she still has a prominent role in the story.  Overall a highly entertaining story, with beautiful illustrations, especially the full page ones, and a story that is filled with creative twists and turns, and an ending that will have you wanting more.
Posted by Brenda at 7:00 AM