I'm really excited today to be a part of the blog tour for Stars So Sweet, the final book in Tara Dairman's All Four Stars series.  Be sure to check out all the other tour stops at the bottom of the post with links to giveaways, author interviews and reviews for Stars So Sweet. 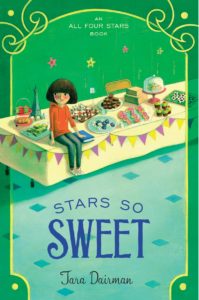 As the summer winds down and Gladys Gatsby prepares to start middle school, she is nervous about juggling schoolwork and looming deadlines from her secret job as the New York Standard’s youngest restaurant critic. When her editor pushes for a face-to-face meeting to discuss more opportunities with the paper, Gladys knows she must finally come clean to her parents. But her perfectly planned reveal is put on hold when her parents arrive home with a surprise:  her Aunt Lydia, one of the only adults who knows her secret, fresh off the plane from Paris. Gladys and Aunt Lydia try one last ruse to fool her editor at the Standard, but even with her aunt’s help, Gladys just can’t manage the drama of middle school and a secret life. It’s time for Gladys to be true to herself and honest with her friends and family, regardless of what those around her think

Opening line:  "Glady Gatsby felt like a fish was flopping around in her stomach."

It's the first day of school and time for Gladys to catch up with her best friends,  Parm and Charrisa.  Moving up to middle school means lots of changes, like having to meet new people when you no longer share any classes with your two best friends.  At the same time, Gladys has been struggling with feeling guilty and being a little dishonest for not revealing her secret job as a food critic to her parents yet, but she's really trying to come up with a plan to break it to them gently.  Things become increasingly complicated when Gladys editor wants to meet with her face to face and maybe now is the time to be honest with Fiona too.  Yet when Fiona backs her into a corner, Gladys' Aunt Lydia offers to help, despite her own string of bad luck, and Gladys finds out that Fiona has an offer for Gladys that is pretty hard to refuse.  I've always had a fondness for Gladys ever since I've met her in All Four Stars.  I will never forget the beginning of the series, or "the creme brulee incident." Ever since I've adored this "secret agent critics" passion for cooking and loved reading her reviews for the Dining section of the New York Standard.  In Stars So Sweet, Gladys was beginning to broaden her horizons joining some school clubs (Mathlete's, Chess Club, and French Club).  It's funny how Gladys believed she had everything under control, even though she keeps adding more and more things to her plate.  But where would the fun be if things didn't become overwhelming for Gladys when she overcommits herself to helping run the bake sale fundraisers for all her clubs from school, even a few she's not even a member of?   Despite the chaos erupting around her, Gladys always stays true to her passions (cooking and writing food critic reviews). I adore her creative spirit and love for fine foods.   This time around we're introduced to Salvadoran, Peruvian, and Cuban cuisines, along with some delectable references to treats like buñuelo's, soccer ball-shaped cookies and macarons. This is the kind of book that you want to read with your favorite dessert handy, cause I guarantee you'll get hungry.  Dairman has a knack for making cooking sound so fun and trying dishes from many different cultures exciting.  Her own passion for cooking really shines through, and any future foodies would be inspired as well.  Stars So Sweet wraps up everything from the series nicely, there's even a visit to Gladys former teacher,  Ms. Quincy, for some sound advice about Gladys being honest with herself, and we find out why Gladys hasn't heard from Hamilton in a long while.  Although Gladys never made it to France, I was happy to see that Aunt Lydia gets to have a more prominent role in the series.   Do I hope there will be more books in the future, most definitely, but I am also very happy with the way things ended? Yep, even the surprise that was revealed at the very end, which I didn't see coming by the way. Bittersweet to see the end of yet another beloved series, but now I have The Great Hibernation of St. Polonius on the Fjord to look forward to.

Favorite line:  "...the longer they wandered, the more Gladys felt like a single chocolate chip drowning in a huge bowl of cookie batter."


Tara Dairman  is the author of the middle-grade foodie novel ALL FOUR STARS (Putnam/Penguin) which was named an Amazon Best Book of the Month and won a 2015 SCBWI Crystal Kite Award. THE STARS OF SUMMER followed in 2015, and STARS SO SWEET (6/19/16) completes the series. Tara grew up in New York and holds a B.A. in Creative Writing from Dartmouth College. After surviving the world’s longest honeymoon (two years, seventy-four countries!), she now lives in Colorado with her family.

Keep up with all of Tara's latest news on her:

Thank you so much, Brenda!

My pleasure! I'm gonna miss Gladys, but all the success to you with The Great Hibernation of St. Polonius on the Fjord, look forward to hearing more about it as we get closer to its release.

Love this series! I'm just sad I'll have to wait for my August school book order comes in to read this one! Sounds just as good as the other two.

I adored the third installment (I refuse to believe it's the last installment~ I SO want to read a Gladys story set overseas!) so much. The characters, the dialogue, the food, the HEART! I own the first two and will be buying the third~ can't wait until my girls are big enough to read these gems :) Thanks for the review!

That does sound heavenly, Gladys on a world tour of food reviews!

You're in for a treat, looking forward to your review already.

I have been wanting to start this series for a long time!They sound like such fun. Glad to hear you enjoyed book 3 so much! :) Awesome review!
~Jess

I hope you get a chance to read the series, it's so fun! But keep sweets near by.